SAFEGUARDING THE RECOGNITION AND RESPECT OF NPP FOOTSOLDIERS 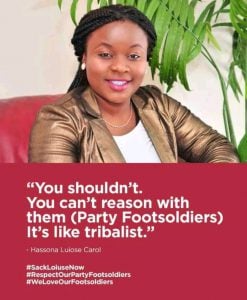 The numerous proud NPP footsoldiers woke up and smell an unpleasant and nauseating comments from one misbider, Dr. Hosanna Louise Carol Donkor, a presidential staffer of the ruling NPP government.

Having excessive pride in oneself, She made this comment, quoted “You shouldn’t. You can’t reason with them (Footsoldiers). It’s like tribalists” under her one Facebook coequal’s indecorous comment about footsoldiers without remembering she’s enjoying the sweat of footsoldiers.

We will not shield the derogatory comments of such ungrateful personality, meanwhile ministers, CEOs and many people who occupied higher positions in this government had been kicked out already. To us, our footsoldiers are our heroes and we will celebrate them on any given day. Hosanna Louise Carol must go.

The core mandate of a member of Staff at the Presidency, is to project and protect the image of the President, and not to infuriate and alienate the party’s grassroots members with uncouth garbage.

We want to remember this arrogant and ungrateful Lady that, a lot of us are more learned and knowledgeable than she’s . We are footsoldiers because we love our party and will do practically anything to advance its course.

She isn’t as beautiful and smarter as the Lawyer Modesta Edjoah Nsowah who stood in the rain to see us come to power. No wonder she cannot engage us.

Annoyingly, she referred to us (footsoldiers) as “it’s.” Such disrespect!
Dr. Hosanna Louise Carol Donkor was in the UK when some of us (students) sacrificed our time and energy to campaign to bring the party to power.

We can state unequivocally that, footsoldiers are not poor and needy people who cannot reason reasonably at all to the extend of her trying to ignore us. Look, the most difficult3 job is how to convince a voter to change the mind to vote for a party. A lot of strategy goes into that job. Footsoldiers are sharp thinking people. We deserve the maximum respect our president, Nana Akufo-Addo has been giving us always.

However, we won’t take it sitting down when disrespectful within the guise of a so-called pepper den ministry feast from our sweat, refuse to acknowledge same and even have the temerity to insult us. There will not be peace till this lady is kicked out of the Jubilee House.

On behalf of our group and also referred to us NPP footsoldiers, we petition your high office to with immediate effect, dismiss from the office of the President, Dr. Louise Hosanna Carol Donkor ( Policy and coordination analyst). We won’t accept any apology as we hope that our demands will be considered to calm nerves of our heroes (footsoldiers). Our legal demonstration will take effect if Dr. Hosanna Louise Carol Donkor remains at post after 14 days. Thank you.

Sat Jun 9 , 2018
Preeta shouts at Karan for his behaviour. He asks why she called all his girlfriends to his room. She says so he learns how to respect girls. He says he doesn’t disrespect them, doesn’t break their hearts, girls like him and he likes girls too, so what’s wrong meeting them? […] 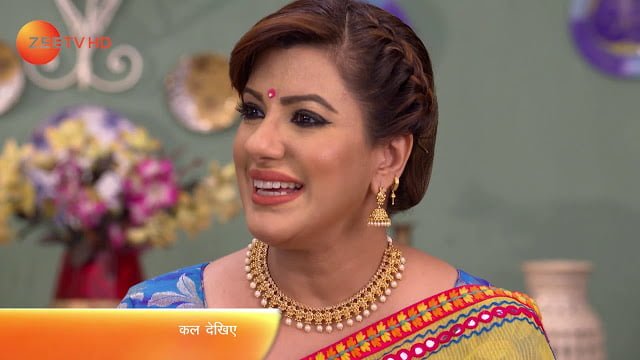