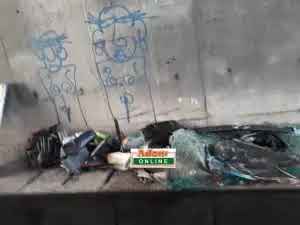 The Tesano MTTD Commander confirmed this to Adom News.
He also noted that, three others are injured severely and the victims and deceased have been sent to 37 and Police hospital respectively.
According to reports, the accident involved a sprinter bus from Ofankor heading to Accra. 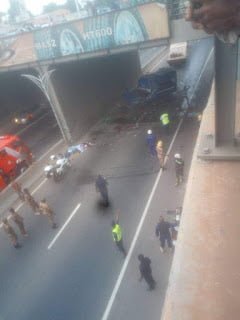 Adom News’ Joshua Kulenu who was at the scene said, some passengers are still stuck in the vehicle.
The driver, he noted, sustained head injury and an ambulance is at the scene to convey the injured to the hospital.
A passenger who spoke to Kulenu said the driver was on phone when the incident occurred.
Meanwhile, the road is virtually blocked but Police and emergency service providers are at trying to bring the chaos under control.
More soon…
Source…Adomonline.com
Facebook
Twitter
Pinterest
LinkedIn

VIDEO: Ebony told me the first time we met that, there was a prophecy about her that, She will become a star and die at the peak of her Career – Abeiku Santana / Bullet