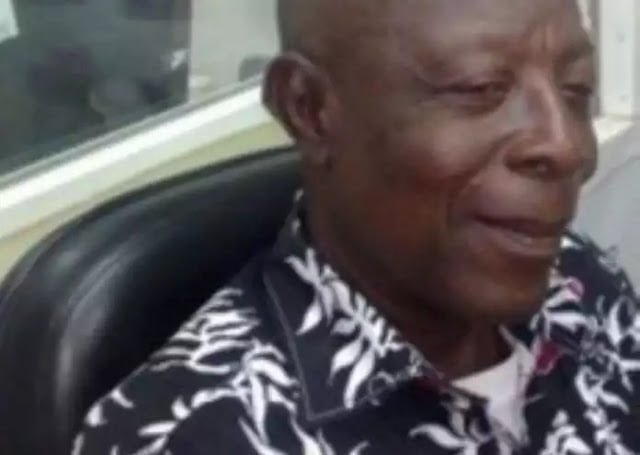 Popular Ghanaian entertainer, Asonaba Kwaku Darko, also known as Super OD is has passed to eternity.
The veteran actor passed away on Tuesday, February 13 at the Swedru Government Hospital in the Central Region.
The 84-year-old veteran actor had been out of the public’s eye for some time due to his illness and had been living in Agona Swedru.
Simon Darko, son of the veteran actor, confirmed the sad news to Myjoyonline.com.
According to him, his late father “wasn’t feeling that well” and was rushed to the hospital on Saturday, February 10, but was confirmed dead around 7:15 am Tuesday.
Super OD, who started acting in the 1970s, gained national prominence in the 1990s for roles in popular series, Akan Drama on Ghana Television.
He was part of the Oppong Drama Group which later became known as Osofo Dadzie Group.
In November last year, former President Mahama, after the Unity Walk by National Democratic Congress (NDC) in Cape Coast, visited his ‘friend’ to check up on him.
The former President was in the company of some members of the NDC including Allotey Jacobs, Central Regional Chairman; Ade Coker, Greater Accra Regional Chairman; Nana Oye Lithur, former Minister for Gender, Children and Social Protection; and actor Clement Bonney (Mr Beautiful) when he visited Super OD.
Allotey Jacobs, on behalf of the former President, presented an undisclosed amount of money to the veteran actor.
In July last year, before former President Mahama’s visit, the leadership of Ghana Actors Guild paid a visit to the actor and presented a mobile phone and an undisclosed amount of money to him.
That delegation included the Guild’s President, Samuel Fiscian; Welfare Officer, Secretary, Ziggy Netteyson; and Kalsoume Sinare.
Simon Darko said his late father left behind at least 13 children.
Facebook
Twitter
Pinterest
LinkedIn

Police to invite Shatta Wale over threat to burn down churches