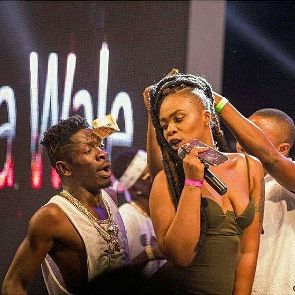 Ghanaian dancehall artiste Shatta Wale might have bitten more than he can chew when he used Stonebwoy’s disability to his advantage. The ‘Ayoo’ hitmaker in a Facebook post in his response to Stonebwoy’s comedian comment described Stonebwoy as a crippled man who misbehaves after experiencing fame. “Ur one knee pad like kanda overpass n u there saying u be good pass me, eeeeiiii Ewiase!!! Fame make ppl talk like they came from a d***…….why u sef inobe woman deh ur side or u be batty…”, he wrote. The comment which didn’t go down well with a lady on Facebook, Nana Ama Burniton, saw her pouncing on Shatta Wale. Nana Ama used the opportunity to diss Shatta Wale and his girlfriend by comparing the breasts of Shatta Michy 1993 Opel seat belt.
“You too your baby mama’s breast like 1993 Opel seat belt. Thank God for plastic surgery but don’t forget plastic melts,” Ama Burniton’s comments read, Background ‘Baafira’ hitmaker Stonebwoy in an interview over the weekend argued that he is lyrically and musically better than Shatta Wale who has been throwing jabs at him in recent times. The BET award-winner further revealed that he “murdered” the ‘Dancehall King’ hitmaker in 2010 during a competition so Ghanaians should stop comparing them because he is not his co-equal. The submissions of the Bhim Nation president has since become a hard blow for the Shatta Movement president to handle.
Source: www.ghanaweb.com
Facebook
Twitter
Pinterest
LinkedIn