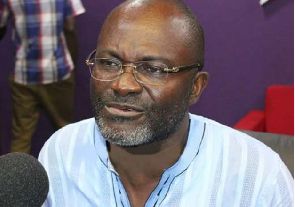 The New Patriotic Party(NPP) Member of Parliament for Assin Central Constituency, Hon. Kennedy Agyapong has renewed his attacks on the immediate past Director of the Criminal Investigations Department (CID) of the Ghana Police Service, COP Bright Oduro threatening this time round to give him three dirty slaps if he comes his way. Kennedy Agyepong vowed to beat the hell out of the former CID Boss in order to show him (Oduro) that he is no longer powerful as was the case in the past. “Has he forgotten that he is no longer in uniform. He is not a man more than me. I will beat the hell out of that guy,” he stated. COP Bright Oduro allegedly stormed Adom TV on Tuesday, February 6, 2018 to demand the video clip of the discussions on the station which featured the MP and Mr Bernard Allotey Jacobs, the Central Regional Chairman of the opposition National Democratic Congress (NDC). Oduro claimed Mr Agyapong mentioned his name in the course of the discussion and wanted the clip to ascertain what exactly Kennedy Agyapong said about him. He was said to have threatened the producers of the show, but after the clip was played for him there was nowhere his name was mentioned by Kennedy Agyapong.

Bright Oduro then bragged that he would have unleashed his boys on Kennedy Agyapong if he had dared to mentioned his name in the course of the discourse. Speaking on Oman FM’s political analysis programme Tuesday, January 6, 2018 Mr Agyapong who used unprintable words to describe COP Bright Oduro insisted that the latter is corrupt and was shielding land guards. “Where did his wife get the Range Rover she drives? Where did he get the cars he drives? How much was his pay? I will disgrace him because he is a first class thief,” he fumed. The Assin Central MP said he is scheduled to traveled outside the country on next week Tuesday, but said he was going to cancel his flight in order to meet COP Bright Oduro at Adom TV so he can teach him a lesson. “For me when I dream I dream about two things that is money and fight so he should be ready. I won’t travel anymore I will face that guy,” he said.
Source: mynewsgh.com
Facebook
Twitter
Pinterest
LinkedIn