Indonesian teen has allegedly been laying eggs for over two years 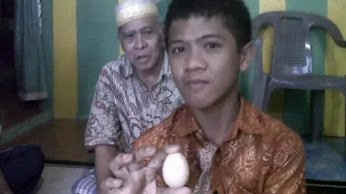 Here’s something you don’t read every day: Akmal, a 14-year-old boy from Gowa, in Indonesia, claims that he has laid 20 eggs in the last two years, with the last two popping out at the hospital, in front of doctors.
Akmal has reportedly been hospitalised several times for his bizarre condition over the past couple of years. During his latest trip to the hospital, the boy allegedly laid two eggs in front of the baffled medical staff treating him.
Doctors maintain that it is impossible for eggs to form inside the human body, and suspect that the boy has either been swallowing them whole or pushing them up his backside.
An X-ray revealed a large egg high up the boy’s rectum, but his father, Rusli, insists that he would never put them there himself.
“He never swallowed eggs whole, why would he do that? I am an imam in my village, so there’s no voodoo. I only believe in the Lord,” the man told local reporters in Gowa, Indonesia.
“In two years he laid 18 eggs and 2 today, so in total there have been 20. I cracked the first egg and its content was all yellow, no white,” Rusli added. “A month later I cracked another one, and its content was all white and no yellow.”
Muhammad Taslim, a spokesperson for the hospital, said that doctors believe the eggs were deliberately shoved into Akmal’s rectum for some bizarre reason, but since they can’t prove it, they decided to quarantine the boy for a while, to see if this truly is some sort of medical oddity.

“Our suspicion is that the eggs were deliberately shoved into Akmal’s rectum. But we did not see it directly,” Taslim said. “Scientifically chicken eggs cannot form inside the human body. It’s impossible, especially in the digestive system.”
Kompas reports that the eggs recently laid by Akmal were analysed in the lab and turned out to be chicken eggs.
If you actually want to see the boy laying eggs, you can do so on YouTube, but to be honest, I regret watching it myself, so I definitely don’t recommend clicking the link unless you need a reason to throw up.
Facebook
Twitter
Pinterest
LinkedIn