Majority Leader, Osei Kyei Mensah-Bonsu has said, the new chamber for Parliament should not cost more than $200 million.

There has been a huge public outcry against the project that has been awarded to British-Ghanaian architect, David Adjaye and a protest has been planned for July 13.

#DropThatChmaber is already trending on Twitter. But what can that $200 million do, if it is invested in other needed projects?

Below are five things that $200 million do for the country.

It can build 154 Hospitals

The Ofankor Hospital
In June 2018, owner of Georgeland Ventures Limited, the company that constructed the structure meant to house the proposed 150-bed Ofankor District Hospital said he put up the structures, without the medical equipment, at a cost of ¢5.7 million ($1.3m). The facility has a maternal ward, a theatre, a child welfare centre and an Outpatient Department (OPD). If this amount is anything to go by, then the $ 200 million meant for the construction of the new Parliamentary chamber can build at least 154 of such hospitals across the country.

Build 5420 six-classroom blocks across the country
In July 2018, GCB Bank handed over a 6-unit classroom block to Bomaa Roman Catholic Junior High School in the Tano North Municipality of the Brong Ahafo Region. The Block cost GH¢200,000 ($36,900 – current exchange rate). So the $200 million meant for the new chamber for Parliamentarians can actually build 5,420 classrooms across the country.

The GCB six unit classroom block for Bomaa JHS
This is in line with the suggestion by ace broadcaster, Afia Pokuah, (Vim Lady) for the government to concentrate on building classroom blocks for schools under trees other than a new chamber for Parliamentarians.

Buy 20,000 incubators for Hospitals across the country
Celebrated Morning Show host at Peace FM, Kwame Sefa Kayi and the Kokrokoo Charities have been on a mission to provide 100 incubators to various hospitals. One of his incubators cost $10,000.

This means that the $200 million meant for the new chamber for Parliamentarians can actually buy 20,000 incubators to be distributed to hospitals across the country.

Finance Gov’t’s flagship policy, Free SHS, for more than 650 academic years
In February, 2019, Economist and former Vice Chancellor of the University of Ghana, Ernest Aryeetey said the free education will cost the country ¢3.3bn ($683,000) in the next academic year – 2019/2020.

Image result for Akufo-Addo launches Free SHS
All three streams will enjoy the Free SHS this year. If this figure is anything to by, then it means the $200 million meant for the new chamber for Parliamentarians can actually fund the free SHS for more than 650 academic years. 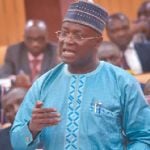 kwabena Frimpong
August 29, 2021
A 7-bedroom apartment serving as residence for Police and Nurses at Bompata, Asante Akyem South Municipality in the Ashanti...

kwabena Frimpong
August 19, 2021
My last encounter with my brother Samuel Marful-Sau was when the two of us decided to attend the...