Actress and singer Juliet Ibrahim , is of the assertion that there is nothing free in this world and that your boyfriend or partner is suppose to pay you after sleeping with you .

Probably , she has now seen the light for her to tap into the popular quote that nothing in this world is free .

According to the beautiful actress, a man is suppose to pay a woman for the services rendered him after he sleeps with her .

The screen goddess took to her instagram page to share an excerpt of a Nollywood movie she starred in where a mother is heard asking her daughter to go back and take money from a man she slept with and was not paid for services rendered.

In the video the mother told the daughter :

“You slept with a man for free in these hard times , get up right now , go back to his house and tell him to pay you . Tell him nothing in this world is for free ”
Is this the advice Juliet Ibrahim is giving to the youth now ?

This post on instagram has brought about different reactions from Ghanaians as some section read different meaning to taking money or being paid after having a good time with your partner .

Well, we can not tell if it is a lesson she learnt from her previous relationship with Nigerian singer , Iceberg Slim or is a warning to incoming suitors that there is nothing free in this world .

Why three South African firefighters died from lack of water

Mon Sep 17 , 2018
The death of three firemen in South Africa has shocked the country, with many feeling the blaze at a 26-floor government building in Johannesburg reveals a reckless attitude to health and safety by elected officials. “If there was water in the building, our brothers would have survived and we would […] 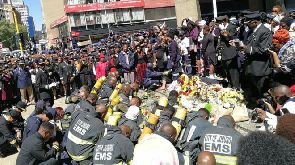