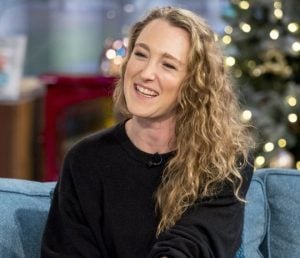 Congratulations are in order for a woman who says she has sex with ghosts – because she’s now engaged to one, she claims.

Amethyst Realm has spoken out about her unusual love life in the past, previously claiming she joined the Mile High Club with a ghost and wanted to have children with one.

And the 30-year-old is now planning a wedding after her spirit lover popped the question in Somerset.

She told The Sun: ‘We’re soulmates, meant for each other, and that’ll never change. The fact that he’s a spirit is by the by.’ Amethyst has previously claimed she has had sex with a number of ghosts and met her new man while she was in Australia on business at the start of this year.

He doesn’t have a name – and Amethyst even revealed she’s not certain he’s male, but says gender is less important when it comes to ghosts. The spiritual counsellor said her fiance proposed at Wookey Hole caves in Somerset.
She said: There was no going down on one knee — he doesn’t have knees! But for the first time, I heard him speak.’

The words ‘will you marry me?’ echoed around the cave, she claimed. Amethyst added: ‘It’s hard to explain but, until that point, his words were inside my head. But, on that day, the words were outside.’

The voice was ‘deep, sexy and real’, she said. Amethyst, from Bristol, says her family and friends are happy for her and she is already planning a Pagan handfasting ceremony.

She added that she knows the idea of having a baby with her fiance ‘sounds crazy’ but believes it isn’t ‘totally out of the question.

Wed Oct 31 , 2018
A trending video shows a Ghanaian pastor speaking candidly about sex. According to him, most Ghanaian married women have never experienced orgasm in their entire lives. He advised married couples to have sex anywhere, Toilet, bathroom, kitchen and other places they may deem fun enough. “Talk about sex, the moment […]