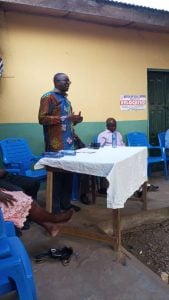 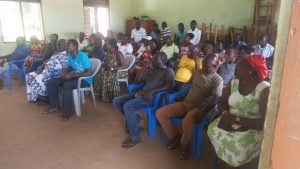 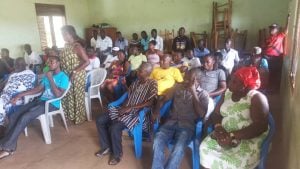 The MP for Sunyani East constituency and the Majority Chief Whip of Parliament, HON KWASI AMEYAW-CHEREMEH last weekend visited the following electoral areas in the constituency to interact and conscientise them on the policies, programmes and projects of government and to also inspect ongoing and completed projects by the government/MP.
He was accompanied by the constituency executives.

The areas visited are:

Whilst there, the MP spoke extensively on the FREE SHS POLICY and the need for the introduction of the double-track system to ensure that all secondary school going children have access to education at that level.

He again, elucidated the importance of the NABCO intervention by government and encouraged all potential participants to discharge their duties as required of them in building our nation.

He gave a comprehensive impact of the planting for food and jobs which received a corresponding affirmation from farmers in these areas.

He continued to emphasize and recounted government efforts at providing good roads for the people, hence, assured them of a major facelift of the roads in the constituency following the approval by Parliament of the SinoHydro facility. He stated that the application of the facility will give a boost to infrastructural development in the country, especially in the road sector.

Some of the projects undertaken by the MP/government at these places include:

Community-based water system with reservoir tank and a number of distribution points capable of serving around 2,400 households a day at Ahenboboano( ongoing)

As usual, he was commended for helping many of the youth get jobs. He was urged to continue to secure more jobs for the youth.