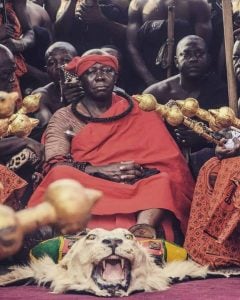 The Asantehene, Otumfuo Osei Tutu II, will today, Thursday, August 24,2018 pay a historic visit to Kyebi as a guest of honour at a durbar being hosted by Okyenhene, Osagyefo Amoatia Ofori Panin to climax the 75th Anniversary of the late King of Akyem Abuakwa Traditional Area, Nana Sir Ofori Atta.

The seeming traditional rivalry between the two traditional rulers which dates back to history was broken few months ago when the Okyenhene, Osagyefo Amoatia Ofori Panin, stormed the Royal Gulf tourney which was under the auspices of the Asantehene as the guest of honour.

The 75th Anniversary of Nana Sir Ofori-Atta’s life, organized by his children, grandchildren and great grandchildren on the theme “Relaunch of Akyem Abuakwa: 1700-1943 from Ofori Panin to Sir Ofori-Atta” is aimed at highlighting the late King’s major achievements in honour of his memory.

The month long celebration of Nana Sir Ofori-Atta, described as the founder of modern-day Akyem Abuakwa, has been marked by many activities including memorial lecture and exhibition.

To be in attendance is the President of the Republic of Ghana, H.E. President Akufo-Addo.

Thu Aug 23 , 2018
t=”” width=”300″ height=”225″ class=”alignnone size-medium wp-image-8334″ /> The MP for Sunyani East constituency and the Majority Chief Whip of Parliament, HON KWASI AMEYAW-CHEREMEH last weekend visited the following electoral areas in the constituency to interact and conscientise them on the policies, programmes and projects of government and to also inspect […]