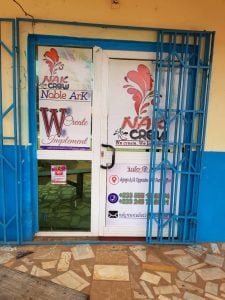 Sports masters from the three Senior High Schools in Asante Akyem North Constituency yesterday stormed the office of NAK Crew, organizers of Face of Tertiary to demand their share of allowance for a football gala organized on Friday, 26th October 2018.

The organizers pleaded with the sports masters to take GHC1000 each of which they agreed but after the matches, the organizers couldn’t meet their pledge.

This infuriated the sports masters which led to confrontations and there was a final agreement that, they will be paid on the next day.

The sports master waited but never heard anything from the organizers so they had to storm the office of NAK Crew in Agogo on Monday, 29th October 2018 but the office was locked.

They therefore went to go to one of the organizers by name Samuel Owiredu Acheampong who is also a teacher at Agogo State Senior High School.

When they confronted Samuel, his explanation was that, the MP for the area, Hon. Andy Appiah-Kubi has promised them an amount of money so they are waiting to hear from him before they can settle them. This explanation didn’t go down well with the sports masters which led to a heated argument and subsequently a brawl which took the intervention of some security men to separate them.

The sports masters therefore vowed to be either given their allowance or cause destruction to the beauty pageant which is about 2weeks away.

We would keep our cherished readers updated