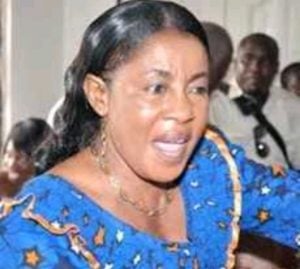 A National Vice Chairperson for the National Democratic Congress (NDC), Anita Desoso, has denied claims that former President Jerry John Rawlings referred to her as a crook.

The reference was made by the NDC founder after she begged him on behalf of the executives of the NDC at a June 4 anniversary celebration at Madina, in Accra.

According to Anita Desoso, she considers the former president as her father but does not accept the reference he made. 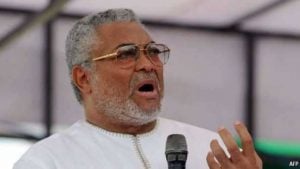 “I am not a crook,” she protested. “On the stage at Madina, he did not say that but when he went home after two to three weeks, I don’t know what happened and you could see people around him trying to say certain things to him but I don’t blame my dad.”

Speaking on 3FM’s Sunrise morning show, she mentioned that a lot of people lauded her for taking such a move when they realized the party needed peace.

She also said that even though the General Secretary of the party, Asiedu Nketia, claimed she took that decision on her own, she said it was in the right direction since she is a National Vice Chairperson and cannot be instructed on certain issues.

“I am the National Vice Chairperson and the General Secretary is the administrator so I have every right to also take certain decisions. Do you think what I did all the members where angry with me? Pastors, imams and elders came to my home to tell me that they need peace and encourage me not to give up.”

The aspiring National Organizer revealed that a lot of NDC members are not happy about the disagreements between officials and she is praying that things are resolved since most party supporters wish they are together.

Fri Aug 17 , 2018
That Black Stars of Ghana have risen two places up to 45th and are ahead of World Cup participants Nigeria and Cameroon in the FIFA Ranking for August despite not featuring at the tournament. The Stars who are now the fourth best team on the African rankings benefited from a new […]