Kennedy Agyapong has vowed to contract women to beat up the founder of the Glorious Wave Church International, Prophet Emmanuel Badu Kobi over his misogynistic comments about Ashanti, Fanti and Ewe women.

Looking very furious on NET 2 TV on Tuesday monitored by MyNewsGh.com, the businessman said he could not fathom why the so-called man of God could be reckless in his utterances about women yet no one is willing to speak up especially gender activists in the country.

“Let him know that it is no longer Mahama who is in power. I will contract women to drill you. Women are those who will drill him and his other foolish junior pastors who were responding in agreement with those comments he made”, he threatened.

In his view, the women groups he classified as foolish, property-grabbing and doormats are rather hardworking women in the country who ought to be appreciated and not denigrated wondering where he got that useless motivation from.

“Do not get me angry by trying to stop me. The same useless comments he made are those I will use against him and his stupid subordinate pastors”, he told host of the show.

According to him, he is worried that women continue to patronize the church of such a character who is an embodiment of embarrassment to God and making a mockery of Christianity as a religion.

Thanks for joining us

“What are Ghanaian women looking for? God has given you all the sense but you are refusing to use it to think and allowing stupid and foolish people like this to insult you for free. I am really angry this morning”, he said.

Tue Aug 6 , 2019
Suspended New Patriotic Party (NPP) Chairman for Bontodiase Electoral Area at Agogo, Awudu Kassim, has caused a stir by cursing his own party executives with eggs and schnapps at a riverside. In a recorded video, the NPP member in the Asante Akim North Constituency was seen wearing white cloth to […] 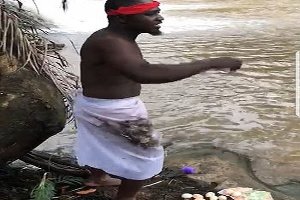