Some Nigerian traders in the Western Regional capital of Takoradi have described Sam Udoetuk-Wills, chief suspect in the three kidnapped girls as an insane person following the latest.

“This guy is not a human being”, the traders revealed to Multimedia’s Journalist, Kojo Yankson who interacted with them and later reported in on Kumasi-based Nhyira FM monitored by MyNewsGh.com.

According to Kojo Yankson, the traders earlier had a different opinion in the initial stages of the police’s investigation but they now appear to be appreciating every allegation levelled against Sam Udoetuk Wills and his accomplices in the missing of the girls.

“The Nigerian traders are saying this is barbaric, inhumane and uncalled for”, Kojo Yankson told the host of Nhyira FM’s morning show, Aduanaba Kofi Asante Enning on the latest development.

Ruth Quayson, Priscilla Blessing Bentum, and Priscilla Koranchie are believed to have been kidnapped between August 2018 and January 2019 and have since not been found.

The chief mastermind of the act, Samuel Udoetuk-Wills a Nigerian was jailed recently but is still facing other charges before Sekondi High Court after he escaped from jail in December 2018 following his first arrest.

Last Friday, Police retrieved human parts from the septic tank of his apartment with suspicion these could be the victims of the kidnapping.

Police, however, reveals that it is only after forensic examination they will be able to confirm if the human parts are those of the girls or otherwise.

“As part of Investigations into the three (3) Takoradi kidnapped girls, the Criminal Investigation Department and the Western Regional Command earlier this evening August 2, 2019, conducted an operation at Kansaworodo a suburb of Takoradi. During the operation which took place at about 7pm, some human remains were retrieved from a septic tank at an uncompleted building.

The building was previously occupied by convict Samuel Odeoutuk Willis who is one of the accused persons standing trial for allegedly kidnapping the three (3) Takoradi girls.

The discovered human remains would be sent to the forensic science laboratory of the Ghana police service for analysis and further investigation”, a statement from the police said.

Tue Aug 6 , 2019
Kennedy Agyapong has vowed to contract women to beat up the founder of the Glorious Wave Church International, Prophet Emmanuel Badu Kobi over his misogynistic comments about Ashanti, Fanti and Ewe women. Looking very furious on NET 2 TV on Tuesday monitored by MyNewsGh.com, the businessman said he could not […] 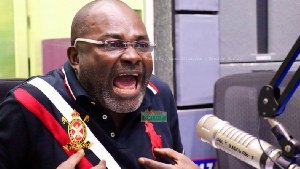