Women who refuse their husbands sex could be charged for emotional abuse and when found guilty, jailed to a maximum of two years imprisonment or to a fine of 500 penalty units which is equivalent to GH¢6,000 or both.

Central Regional Coordinator of the Domestic Violence and Victim Support Unit (DOVVSU), Mr George Appiah-Sakyi who made this known has therefore called on husbands to report their wives to the police for the law to deal with them.

According to him, the law is also applicable to men who may deny their wives sex encouraging such emotionally abused women to also lodge complaints with the police.

At a sensitization workshop for leaders of churches in the Cape Coast Metropolis on terrorism and other security issues, the police chief stated emphatically these violations are grounded in law and amount to emotional abuse punishable under the Domestic Violence Act 732 of 2007.

He also stated that women who refuse to give sex to their husbands should equally be reported.

“If your wife wears jeans to sleep and causing you emotional abuse it’s an offence and you can report her to DOVVSU,” he stated.

Sun Jul 21 , 2019
The Commanding Officer of the 37 Military Hospital, Brigadier General Michael Akwasi Yeboah Agyapong, was yesterday pulled out of office after 32 years of service to the Ghana Armed Forces. At a colourful ceremony at the Quarter Master Yard at the hospital, which included a march past, Brig. Gen. Agyapong […] 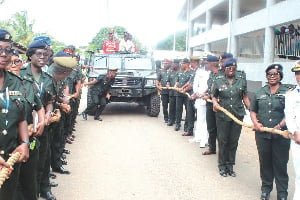