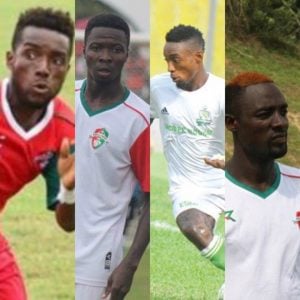 Three players from the Ghana Premier League newcomers have touched down in Kumasi ahead of their possible move to the two-times CAF Champions League winners, Kickgh.com can authoritatively confirm.

Also, Elmina Sharks striker Felix Addo has also landed to complete his move to the Kumasi-based after agreeing personal terms with the club.

Kickgh.com earlier reported that The Porcupine Warriors have reached an agreement with Elmina Sharks over the sale of the Black Star ‘B’ striker.

Defender Ismail Abdul Ganiu who scored two goals in his 15 appearances for Karela FC in his debut season at the club will be signing a three-year deal with Asante Kotoko today.

He won three MVP awards in the first round of the Ghana Premier League.

Ganiu was part of the Wa All Stars team that won the Ghana Premier League two seasons ago.

He joined Karela FC on a short deal prior to the start of the 2017/18 Ghana Premier League after parting ways with Ukrainian top flight side Olimpik Donetsk.

With Maxwell Baakoh who is winger also joined Karela FC prior to the start of the 2018 Ghana Premier League season from Wa All Stars.

He also scored one goal in his 14 game outings for the Anyianse-based club.

Ivorian international Jean Vital Ourega who was earlier reported joining South African club SuperSport United has also been spotted at the secretariat of Asante Kotoko for the past hours.

The 22-year-old enforcer is also in advanced talks with the Porcupine Warriors to conclude his move by the close of the day.
Ourega won three MVP awards in the first round of the Ghana Premier League where he made 13 appearances for Karela.

Kotoko are currently preparing ahead of their 2019 CAF Confederation Cup campaign which will start next month.

Wed Oct 31 , 2018
The diminutive winger has completed his switch to the Porcupine Warriors lads in the ongoing transfer window, Kickgh.com can exclusively confirm. Kumasi Asante Kotoko have made a sensational move to sign Maxwell Baakoh from fellow Premier League side Karela FC. The 23-year-old signed a three-year deal with the Porcupine Warriors […]