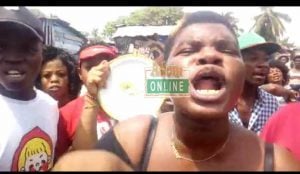 The Kasoa Divisional Police Command in the Central region has denied claims that the Police shot indiscriminately to kill an innocent person in an attempt to arrest some armed robbers at Gomoa Budubram.

Police Commander, ASP David Agyemang Agyin said the suspect died while being rushed to the hospital for medical attention.

His comment follows threats by irate youth in Gomoa Budubram popularly known as Liberia Camp threatened to burn police vehicles should they attempt patrolling the area.

The decision was borne out of the alleged killing of a resident, Alhassan Awudu popularly known as Asah Wednesday said to be part of a gang terrorizing residents in the area.

But speaking on Adom FM’s morning show, Dwaso Nsem Friday, the Divisional Police Commander stated emphatically that, his men did not kill the suspect.

Rather, he explained that, during the swoop, the deceased decided to escape and fell leading to his re-arrest.

ASP Agyemang Agyin said the postmortem done on him revealed that, Asah died out of a fracture of an internal organ and not gunshot wounds.

He warned the police will use all necessary force to neutralize any threat should the residents decide to storm the police station.

“I have heard the residents want to burn down the police station but we will use all necessary force to neutralize them” ASP Agyemang Agyin added.

Fri Nov 2 , 2018
The Ghana Police Service at East Legon has declared brother of Black Stars skipper, Asamoah Gyan, Baffour Gyan wanted over his decision to seize the passport and other travel documents of the wife of Asamoah Gyan and her children when he met them at the airport. Lawyers for Mrs. Gyan […]