It has emerged that some Black Stars players allegedly busily engaged themselves in sexual bouts before every match during their short stay in the ongoing 2019 Africa Cup of Nations in Egypt.

Some of the players reportedly lodged their girlfriends in the same hotel they camped in, sneaking to have sex, a practice some believe accounted for their poor performance at the tournament.

The Black Stars were on Monday kicked out of the tournament by their Tunisian counterpart at the at round of sixteen stage.

This was after Ghana was beaten 5-4 on penalties after a 1-1 draw.

Ghanaians are livid that the Black Stars could not end the 37 trophy drought after the team admitting that they were given all they needed for a successful tournament.

Kasapa FM’s Sports Journalist Micahel Tuffour aka Ariel Otega who’s covering the tournament in Egypt reported that indiscipline on the part of the players contributed to the team’s abysmal performance.

He wondered why some of these players could not control their sexual urge for just this brief period the tournament was underway.

“Some of us came to work in Egypt and didn’t sleep on the job, we have all the exclusives about Black Stars players. Some of these players whom the state spent huge monies on, after being camped on the third floor of the hotel they resided in, brought their girlfriends in and lodged them on the fourth floor in the same hotel. They go up to the fourth floor and engage in bouts of sex before every match. Some of these girls came from Dubai. Just two months these players who had been given $36,000 as qualification bonus each were so money conscious and couldn’t control their libidos and had so much sex affecting their performance in the process. Some of us journalists were not comfortable with what was happening but decided to keep our mouths shut until the end of the match.

“In the AFCON 2013, the same thing happened when some Black Stars players brought their girlfriends to camp and it was resolved that, that will not happen again, but here we are with that same behaviour being repeated in Egypt. We have a lot to say when we return to Ghana, we’ve told the players that they’ve hugely disappointed Ghanaians because a lot of money was invested in them,” He added.

One thought on “REVEALED: BLACK STARS PLAYERS HAD S3X WITH GIRLS FLOWN FROM DUBAI BEFORE MATCHES”

Tue Jul 9 , 2019
A violent clash over a disputed parcel of land at Dagombaline in Kumasi has left seven persons with severe machete wounds and two buildings as well as a makeshift structure burnt down. Some residents have also started fleeing the area which is under the Asokore Mampong municipality for fear of […] 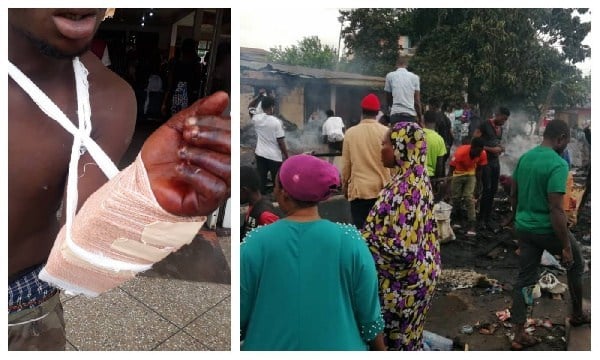