Former Director-General of the Ghana Maritime Authority (GMA) Kwame Owusu has asked the Minister of Transport, Kwaku Ofori Asiamah to release the report of an investigation conducted on him over allegation of corruption while in office.

The Minister in October 2018 directed the Board of GMA to investigate allegations of impropriety leveled against Mr. Kwame Owusu after it emerged that he in 2017 organized an end-of-year dinner for staff at a cost of GHC135,123.

He explained that the Authority budgeted for 500 people despite a staff strength of 200 to allow for stakeholders, wives, girlfriends and dependants.

Again, Mr. Owusu also renovated his two-bedroom official residence and expanded it into a four-bedroom house fitted with 11 air-conditioners all at the cost of GHC200,000.

Mr. Kwame Owusu who subsequently resigned from office made the headlines recently after President Akufo Addo his appointment to head the management board of the Ghana Revenue Authority.

Civil Society Organisations, the opposition National Democratic Congress (NDC) as well as some individuals, have called on the President to revoke his appointment until he is cleared of corruption allegations.

Commenting on the issue on Metro TV’s Good Evening Ghana show, Mr. Kwame Owusu stated that he’s all for the release of the report for public consumption as he’s confident he’s very clean.

Fri Aug 9 , 2019
Member of Parliament (MP) for Assin Central, Kennedy Agyapong is worried that some bigwigs within his party who feel they are handsome are grabbing everything damning the consequences that come with such conduct. He wondered if those persons said to be bigwigs in the party will have the […] 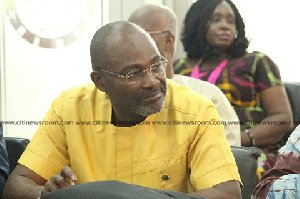