OPEN LETTER TO MY FELLOW DELEGATES

REASONS WHY WE MUST VOTE FOR STEVEN NTIM 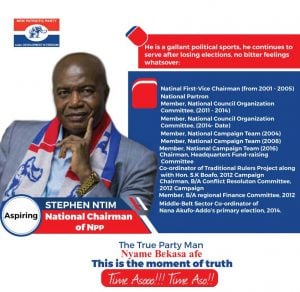 I humbly write this letter to draw your attention to a few salient factors that we must consider in choosing our party’s next National Chairman. Specifically, I wish to outline a few reasons why you and I must vote for Hon. Steven Ntim.

As our party inches closer to the National Delegates Congress next month, it is important that we reach some level of understanding about the kind of leadership we wish to vote into office to steer affairs for the next four years.

Due to past experiences with the National Chairman position it has become extremely necessary that we delegates make our decision with introspection, retrospection and circumspection.

I believe that it is important for us to elect Mr Steven Ntim for all the good reasons in the sincerest best interest of NPP. I say so for reasons stated below.

*A. STEVEN NTIM IS A THOROUGHBRED DYE IN THE WOOL PATRIOT*

Hon. Steven Ntim has dedicated and lived all his political life in service of our great party and irrespective of the circumstances he has always put up his best to advance the cause of NPP. As a party that rewards loyalty and diligent service it is only fair that we elect one of our own who has always been with us and for us, unconditionally. It is my prayer that you will consider this and vote for Mr Steven Ntim.

*B. STEVEN NTIM IS UNRIVALLED IN HIS PERSONAL CONTRIBUTION TO NPP*

Among the candidates for the Chairmanship, Steven Ntim stands tall, unrivalled and unequaled in his consistent and generous contributions to the NPP as a party. Here is a man who has devoted himself and his resources to the welfare of the party at all levels. Fellow Delegate, permit me to enumerate a few of the good things Mr Steven Ntim had been doing for NPP.

1) In 2005 when the party was in serious financial distress he donated fourteen (14) brand new pickups to the ten Regional Offices and selected constituencies in dire need of vehicles for party work… *All for free.*

2) He has also always printed parliamentary posters free of charge  to most aspirants in general elections since 2005 till date.

3) In the last general elections 2016, Mr Steven Ntim printed posters for about 116 Parliamentary Candidates across the country to augment their campaign efforts.

4) He made available building plans for the construction of party constituency offices across the country in 2004.

5) He gave out money for the purchase of permanent land for the offices in most constituencies across the country in 2005.

6) Since 2001 till date, Ntim has consistently printed customised party complimentary cards to all Constituency and Regional Officers across the country.

7. From 2001, Hon Steven Ntim was financing the printing of *blue and black* party membership booklets free of charge which were used to raise funds for the party by recording payment of membership dues.

We certainly cannot ask for more.

Fellow Delegate, please let us remember the past and let us be guided by it to create a better future for our party.

Without doubt, Mr Steven Ntim remains the purest patriot among the pack. Let us reward him with a resounding victory, a victory for NPP.

Let us not toy with the progress of NPP, and let us not play into the hands of those who have only come to enjoy the spoils of the sacrifice and diligent service of people like and I and Mr Steven Ntim who have always been NPP.

Fellow Delegate, I will lay down my pen at this point but I hope and pray that my humble message will resonate with you and respond to your aspirations for NPP as a delegate.

Let us make a decision that we can all look back on and proudly say to ourselves that we made a good decision for NPP.

Mr Steven Ntim does not make empty castles in the air promises, he delivers… And that is what he is known for.

Sincerely,
From a Delegate

BUILDING A STRONGER PARTY TOGETHER

THE BATTLE IS STILL THE LORD’S!!!!

Sat May 19 , 2018
President Nana Akufo-Addo has said that the so-called unprecedented projects, especially roads, which former President John Dramani Mahama and his National Democratic Congress (NDC) government spoke about are nowhere to be found. During the 2016 electioneering campaign, then President Mahama accused Nana Addo, then presidential hopeful of the New Patriotic […] 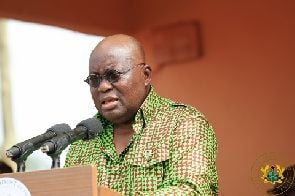