President Akufo-Addo knows very well that he has selected awkward appointees in terms of performance for the running of his administration.
Whereas a Minister like Hon Joe Ghartey is working more in absolute silence, others spend most of their time with the media, as if either they run the information ministry, or they are the communications wing of the NPP.
Someone like Albert Kan Dapaa is a silent mischief maker. He’s the cause of all the disaffection and apathy that has gripped enthusiastic Party faithful, members, foot-soldiers, and sympathisers. His decisions and actions are venomous and damaging to the NPP

Patriotic Ghanaians and NPP faithful, particularly the foot-soldiers who toiled to bring NPP and Akufo-Addo into power may ask “how and why Albert Kan Dapaa was appointed as National Security Minister”.
How did Frema Opare secure the position of Chief of Staff?

The answers are very simple.
Albert Kan Dapaa had declared his isolation from politics long before the 2016 elections with a declaration that politics was a mugs game, so he saw no reason why he should involve himself in it and be spending his hard-earned money on such useless things. By then, he was working on a UN appointment in Kenya. But as soon as he heard about the NPP/Akufo-Addo 2016 landslide victory, he flew back from Kenya and gave incorruptible Akufo-Addo US$100,000 to part-finance his thank you tour of Ghana before being sworn-in as President. This is the true story that landed incompetent Albert Kan Dapaa his National Security Minister job, who like a mischievous child, he damages things in silence. Was it not Kan Dapaa who advised ex-President Kufuor not to venture going to the Tain decider elections because security had broken down, and that he had lost political control over the Ghana Armed Forces? If so, how could such a person be appointed National Security Minister?

Akosua Frema Opare, the Akufo-Addo appointed Chief of Staff, has by herself declared her lack of knowledge, ability and capability to be on top of the job of Chief of Staff, yet Akufo-Addo will not reshuffle her from that position.

In the words of one of the German dignitaries who accompanied Chancellor Angela Merkel to Ghana, he described Gabby Asare Okyere Darko as the mover of government operations, yet not responsible for what he causes to be moved.
Ghanaians may recall the shameful removal and dismissal of Hon Boakye Agyarko from the Ministry of Energy. The obnoxious deal was drafted by Gabby and Asante Bediatuo, but nepotistic Akufo-Addo deems it an unpardonable sacrilege to betray his kinsmen by saving the image and reputation of someone he knows only through politics.

Akufo-Addo is indeed a disgrace to the principles and tenacity of his so-called great grandfather, the late Dr J. B. Danquah, whose commitment to politics and emancipation of Ghana (then Gold Coast) from colonial serfdom was broad-based inclined, unlike Akufo-Addo, who is nepotistic, and inclined to family, friends and cronies approach to political governance. Though he’s bragging about having introduced Free Education for all Ghanaian children, and also building railways, these don’t fascinate Ghanaians, and they won’t win Akufo-Addo elections in 2020, unless he is able to unite the NPP, and take care of the people who sacrificed their lives for him to be President of Ghana, yet this is what, obstinate as he is, he cannot do. Anybody who doubts Akufo-Addo’s sectionalist nepotism may visit the Jubilee House and ask the hometown of the staff there, from messengers to the top, and get the shocking fact that a greater majority of them are of Akyem/Akuapem/Eastern Region extraction. In 2020, Akufo-Addo probably expects only these people and their families to vote for him and the NPP.

Unless, and not until the redeemer ‘Angel’ of the yesteryears, but turned odious equivocal Akufo-Addo, who creates at one end and destroys another end has declared not to contest the 2020 congressional primaries, and to step aside, NPP voter apathy will continue to grow by the day, and to the advantage of the opposition NDC. Akufo-Addo as President of Ghana is dividing and destroying the NPP, whiles thinking that he’s transforming Ghana with Free Education and building railways.

As our secretariat writes now, the powerhouse of governance has been moved from the Jubilee House to Kyebi, yet we weren’t told that a vote for Akufo-Addo was a vote for the Akyem mafia, to be presided over by Motia Ofori Panini of the Abuakwa paramountcy. Should Akufo-Addo, a member of the erstwhile CPP socialist group be allowed to be NPP leader and President of Ghana, his atrocities from 2020 to 2024 will sink the NPP beyond recovery. His removal is now or never.

We are therefore calling for Akufo-Addo to step aside now to save our beloved NPP from an impending and imminent 2020 electoral disgrace.

Wed Oct 24 , 2018
US President Donald Trump has called Saudi Arabia’s response to the murder of journalist Jamal Khashoggi “the worst cover-up ever”. He added that whoever organised the plot “should be in big trouble”. Secretary of State Mike Pompeo said, shortly afterwards, that the US “will punish those responsible” and is revoking […] 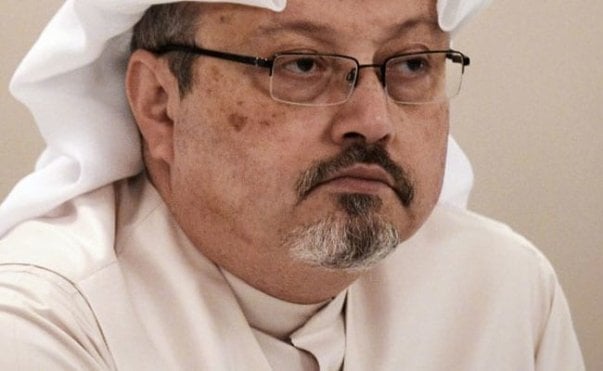