The Madina Zongo Junction headquarters of Kencity Media has been thrown into a state of mourning after news about the death of its senior reporters with Oman FM, Opanyin Kwadwo Fordjour went viral.

According to close family sources, he died on Sunday at about 9 pm of what is suspected to be hypertension according to medical doctors at Legon Hospital where he was on admission.

During the 2012 election petition, he marvelled Lawyers with his understanding of proceedings at the court though not a member of the BAR.

He left behind four children and a wife.

The body has been deposited at the Legon Hospital morgue, pending an autopsy.

It would be recalled Mohammed Ashley who works with NET 2 TV a subsidiary of Kencity Media in October last year, fell from the Madina overpass and died while trying to capture video footages of the gas explosion.

Mon Sep 24 , 2018
The Member of Parliament for Efutu constituency has urged the Auditor General to either resign or submit to due process in his public brawl with the Board Chair of the Ghana Audit Service. Alexander Afenyo-Markin said Daniel Domelevo is not being fair by whipping public support in his claim that […] 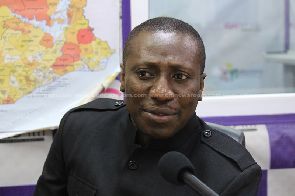