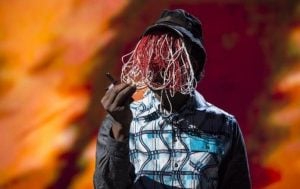 Waves of tremor are sweeping through the Ghana Health Service (GHS) over internationally acclaimed investigative Journalist, Anas Aremeyaw Anas’ latest exposé which is set to be released soon.

Investigative Journalist and Ghana’s most feared man Anas Aremeyaw Anas on Friday November 23, 2018, threatened to once again shake the country as he prepares to drop another exposé video which he said is hotter than his previous work “Number 12”.

Flyfmghana.com has learnt that, Anas’ yet to be released video from some major hospitals across the country captured massive corrupt activities by some recalcitrant Doctors, Paramedics, Hospital Administrators, Nurses and Midwives, NHIA workers, Radiologists as well as Pharmacists.

“We must be worried and of cause we’re worried about this Anas video. This style of investigations is naming and shaming process so everyone is worried. We should pray things turn out good”, a senior staff at GHS told otecfmghana.com.

Anas after the release of “Number 12” in June received various backlash from some people in society with their leader being Member of Parliament for Assin North Kennedy Agyapong who threatened to expose Anas as a very corrupt person but till date, people think he is yet to drop a concrete proof.

Aside all these Anas is not backing down on his mantra to Name, Jail, and Shame corrupt and bad people in society.

At the TPF National Media Festival 2018 at the Best Western Atlantic Hotel in Takoradi last Friday, Africa’s most revered and feared undercover journalist said, “people have called number 12 names, and also described its impact in many forms, but I can tell you, if anybody thought number 12 was hot, what is coming will be fire”.

He also addressed some issues that were raised about his style of work.

“How does anybody expect me to carry my long camera, enter an office and say, I have prima facie evidence against you, talk to me”? Anas questioned to a resounding applause.

He said, “Am not going to stop this job, I will use the same methods until we are collectively able to eliminate or at least reduce corruption it considerably”.

These food sources will promise you a lovely and solid child

Practice is great for joints with mileage joint inflammation

Measles flare-ups conceivable in the midst of ‘amazing…