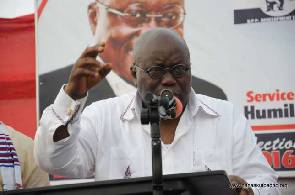 The presidential candidate of the opposition New Patriotic party (NPP), Nana Akufo-Addo, has appealed to the Paramount Chief of the Bawku Traditional Area, Naba Abugragu Azoka II, and the people of Bawku to vote massively for the NPP in the December polls.He said the Bawku Traditional Area will receive massive social infrastructure and interventions to improve the fortunes of Bawku.Nana Addo reiterated that, he is not interested in the domestic issues of chieftaincy disputes in Bawku, adding that, when elected president he will assiduously find a permanent solution to the issue.He debunked allegations that, he supports either the Kusasis or the Mamprusis. Nana Addo disclosed this when he paid a courtesy call on the Bawku Naba, Azoka II.Nana Addo said his interest is in the peace and solidarity of the area for the development of Ghana.“It is in the interest of everybody that peace continues to reign in Bawku, that is why everybody must support the process to elect me as president. I am not interested in becoming the Bawku Naba but I can assure you that, you (Bawku Naba) has nothing to fear if am elected into office. On the contrary, Bawku Naba will have me (Nana Addo) as a strong friend to develop Bawku.”Nana Addo also lauded the people of Bawku and the inter-ethic peace committee efforts for relative peace and stability in Bawku.He said an NPP government under his leadership through his One District One Factory and the One Village One Dam policies, will create jobs and export opportunities for the people of Bawku.He impressed on the people to give him the chance to transform Ghana from the current hardship to prosperity.“I know the constitution will not allow chiefs to do active politics but I want you(Naba Azoka II) to vote for the NPP on December 7 to support me to become the President of Ghana,” Nana Addo stated.On his part, Naba Abugragu Azoka II endorsed Nana Addo for a one touch victory in the December polls but challenged him to deliver his promises when elected.
Facebook
Twitter
Pinterest
LinkedIn