I WILL BURY NDC IN CENTRAL REGION – YOUTH ORGANISER HOPEFUL 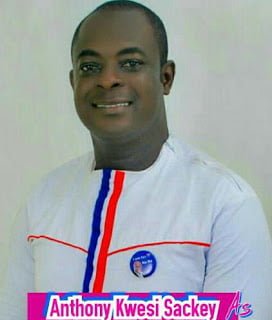 He disclosed this when he met a group of Volunteer youths at Moree Junction to present his vision as an aspiring youth organiser to them. During the interactions, one of the youth, Mr. Dextone Arthur Frederick asked the young astute politician his plans to ensure victory for NPP come 2020. In response, Mr SACKEY swore to lead the NDC back to their ancestral home clothed in their birthday suits.
“The NDC must not be given any right to exist here again. Even if they are zombies, I will extinct them,” he said.

The NDC in central region  performed woefully during the 2016 parliamentary elections. Out of 23 parliamentary seats, the NPP through hard work claimed 19 of them leaving the NDC with four.
For this, SACKEY claimed NDC was dead.
“The NDC was annihilated. It was killed in 2016, it’s burial will be organised by me come election 2020.” he assured. ” I will lay NDC in state naked and burry it same’

Charged by this, the willing-to-work-for-victory youths inquired from The Politician how he was going to execute that agenda and he declared, “the NPP government has it a promise to implement Youth Centred policies to empower the youth of which central regional youth are no exception. I will ensure all people benefit from the visions of H. E Nana Akufo-Addo.”

Unemployment became bedfellows to graduates who left school during the eight year reign of the NDC. The taxpayer’s children were denied job opportunities resulting in economic hardships. The NPP is opening doors for the Ghanaian people to work.

He went further to list some of the interventions implemented by the NPP government which included :

He said the NDC are thieves and they definitely will steal his ideas if he said them all.
Notwithstanding, Mr Sackey said he was making NPP more attractive to the youth. He was assisting and empowering them to gain their livelihoods. He was mobilising the youth across the region for a massive shake up. This, he believes, the four mistaken seats occupied by the NDC is simple to reclaim.
He entreated the youth to “just get youth organizer who understands these programs and can pull the central youth along its implementation and NDC will evaporate into thin air.

Mr Sackey closed the session by calling all delegates in the region to support his cause and also vote massively for him come April, 2018 because he comes with an Agenda that seek to serve all people.