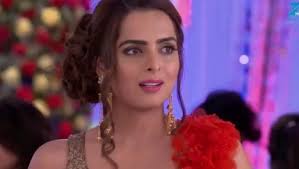 Preeta decides to go to Sherlin’s house. The hooded man brings Sherlin to her house and says she must not irk her ex-husband, her mother isn’t home. Sherlin happily goes into his arm. Preeta finds the door of house opened, and decides to go inside without knocking.At home, Shrishti tells Dadi and Mama ji that Preeta feels guilty that it’s because of her enemy that Sarla had to go jail. Shrishti says Preeta made Rishab marry Sherlin, and now she thinks she is responsible for Rishab marrying a wrong girl. Shrishti says now Preeta went to Sherlin’s to teach her a lesson.
The hooded man carries Sherlin into a bed room. Preeta comes from behind and notices Sherlin had shut the lights of the room. She hears Sherlin’s giggles from inside and peeks through the window; she wonders
if Sherlin is involved with some other guy. The man says such open invitation would cost Sherlin a lot. Sherlin asks him to think how Rishab would feel about them, if he isn’t ready to accept them two, who would he kill; Rishab or her? Preeta backs up at once and the vase fell off. Sherlin sends the man outside to check.At home, Rishab was thinking about Preeta. Karan comes to him and assures mom would be fine, he was worried as he notices Rishab was crying. Rishab says he was worried taking Preeta, she blamed him for not being able to stand beside her.

Karan says it doesn’t matter. Rishab says she isn’t somebody, she is Preeta. He is upset that he couldn’t stand with her, no matter what the situation. Karan holds Preeta responsible and thinks he would bear her bitterness that makes Rishab upset. Karan takes a leave from Rishab.Sherlin and the man comes out. Preeta was hidden behind a wall. Sherlin sends the hooded man to look her way. Preeta goes to the other side. All at once a rat crosses Sherlin’s feet and she screams. The man brings Sherlin to the room and forbids her ruin his mood any further. He says there was a cat and nothing else.Preeta returns home and feels bad for making Rishab marry Sherlin. She didn’t know how characterless Sherlin is. She decides she won’t let this marriage happen, she must tell Rishab about her reality. As she passes by a car, Karan comes down. Preeta ties to speak to Karan but he was angry. He tells Preeta that she took advantage of Rishab, she didn’t know what he would feel about her bitter words. He warns Preeta not to spare her if his brother is disturbed. Preeta jerks his hand away and says he has no right to misbehave with her, she forbids him be with her and Rishab. Karan tells Preeta not to consider herself Rishab’s friend, she isn’t of the status. Preeta says friendship doesn’t consider status. She tells Karan it’s because of Sherlin that his mother is in hospital and Sarla in jail. She narrates him the whole story. Preeta says she got to know about the reason as well, Sherlin was jealous of her and Rishab’s friendship, she didn’t take her jealous talks serious. Karan finally says he is really disgusted, can she add something else in the story. None would believe a story like hers. He is sure someone like Sherlin can never ruin her own engagement. Preeta says she has a proof of all this. Karan tells her to take the proof to police station. Preeta says she went to Sherlin’s house to speak to her, but there she was moved about what she witnessed. Sherlin was with her boyfriend. Karan laughs about it and tells her to stop it and not make the stories. He asks if he would trust all of her stories, if she had an affair why would she have involved so many people in the engagement if she isn’t interested in Rishab. Karan says he would tell Preeta now what is right. The trust is, Preeta is jealous of Sherlin, she mixed something in the food so that the engagement is ruined, she gets near to Rishab and ultimately marry him. Preeta insists whatever she told him is all true. Karan says no, he would tell her what’s true; she dreams of Rishab but she must remember they can never be together.

PRECAP: Preeta asks Karan for a chance to prove Sherlin isn’t the right girl. At home she was worried why everyone considers her behind Rishab.
Facebook
Twitter
Pinterest
LinkedIn