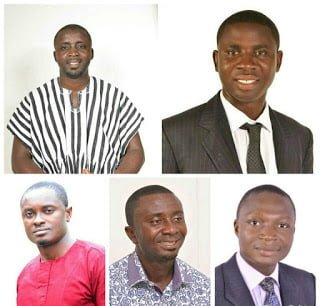 A poll conducted by NPP students in the Kumasi Technical University in the Ashanti region with the help of Ashanti POLITICO consult has revealed
The Opinion Research poll which they started two weeks ago and ended this Tuesday afternoon suggests that the youth are much interested in personalities who are willing to help them gain employment, an approachable person, a person who will deliver on his promise, and finally help the party to retain power.

The poll which was constituted with 300 sample size from the newly elected constituency executives from a random sampled constituency revealed that,
Nelson was leading with 34.47 percent of likely voters questioned in the poll,  with his close contender being Raphael Patrick Sarfo also gaining 34.30 percent.
Followed by Kwakwa also attracting 20.03 percent, Kwaku Frimpong also attracting 8 percent, Michael AKuoko also attracting 3.20 percent

According to the the voters, they voted for Nelson because of his incumbency, because of that, they thought it wise to give him the nod to continue. Many who did not agree with them also commented that, Nelson is a good candidate but have doubt in his age, thus he is perceived as too old and beyond the youth bracket . Also, his humility is questionable. Others see him as arrogant , undemocratic and does not qualify to lead the youth .

One of the strongest argument  leveled against him is that, he is the current Youth Employment Agency ( YEA) boss in the Ashanti region, and he would not get time to lead the youth to consolidate power towards 2020 election because they wanted someone who is not too engaged and will be free and available to mobilise the youth for 2020 elections and beyond

Many that voted for Raphael Patrick Sarfo (RALPH) was based on the fact that he is humble, approachable, good communicator and have many connection with many stockholders in government . He had majority of the students support because of the scholarship package the students claim he spearheaded for many Tescon members during their difficult time , and seeking jobs for the youth.
One funny aspect  With Ralph was, some of the ladies who voted for him on lighter note , claimed he was handsome and appealing  just like Justin Koduah , the former Youth organiser . They saw Raphael Sarfo , as the perfect replacement to Koduah , the YEA boss.
However those who voted against him believed this is his first time in contesting and must have patience.

With Dennis Kwakwa, most of those who voted for him believed he is a very good communicator, and have link with the grassroots. But his critics also believed that he is arrogant and his integrity and credibility is questionable, many also saw him to be timid, most of them also made it clear that he can not lead the youth because he is surrounded with more  controversies, moral issues and scandals.

With Kwaku Frimpong, the few people who voted for him did that based on sympathy since this is his third time contesting for the same position.
Many of the sample size also said that after contesting for three times without succeeding, they raised doubt on his age and suggested he should have contested for the organiser position and not Youth Organiser. They also had problem with his communication skills . They saw him to be weak, timid and not too motivational, even though most of those who voted for him did that based on sympathy, majority believed he isn’t the right person to lead the youth because his confidence level is very low and has communication problem.

Some of them voted against him because they claim he doesn’t support the party again any time he losses election. He has not been seen in any NPP programmes when the part was in opposition and has resurfaced because the party is in power .

With Michael Akuoko, those who voted for him said , he has the name and very good as serial caller . However, many also disagreed questioning his communication skills . They also thought he has very poor link with the Tescon members and finds it difficult expressing himself when he meets the students and many youths in the campuses . They however see no seriousness in his ambition.

The Ashanti POLITICO Consult opinions poll was conducted is a credible opinion poll conductor made up of students and high ranked personalities with political knowhow.

The margin of sampling error would be  plus or minus 2 percentage. Ashanti POLITICO Consult is a nonpartisan but provides credible research and insights on politics and policies.

I WILL BURY NDC IN CENTRAL REGION – YOUTH ORGANISER HOPEFUL