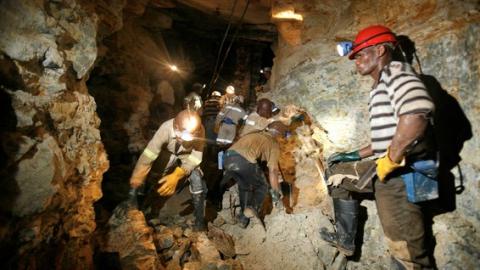 Hundreds of miners are believed to be trapped underground at a mine in South Africa’s Free State province, eNCA reports.
It says 950 miners were trapped underground on Wednesday night after a storm interfered with electricity supply, adding that 64 have been rescued so far.
News agency Reuters reports that more than 1,000 miners are trapped and that a storm had interrupted the power supply to the mine, but adds that they are not in danger.
The mine is owned by Sibanye-Stillwater mining company.
Its spokesman James Wellsted said the miners were safe and receiving food and water.
He added that power was being restored to the mine but there was not yet enough to bring the miners to the surface.
Source: BBC