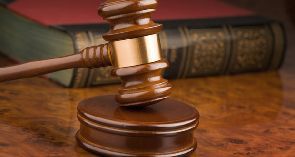 Kwabena Francis, a driver’s mate at Bosuso in the Fanteakwa District
of the Eastern region has been
convicted to six (6) months prison
sentence in hard labor and additionally fined Ghc2, 400 to be paid as
compensation to his Uncle, Tetteh Stephen, for butchering him.

He was convicted by the Koforidua Circuit Court ‘B’ on his own plea of guilty to the offense of causing unlawful harm.

The Prosecutor, Chief Inspector Bernard Annor narrating the facts of
the case explained that, the incident occurred on January 18, 2018 at
about 10:00pm.

He said the victim was in the house when the convict returned home
intoxicated and started raining insults on the victim without
provocation.

The
Prosecutor said, the victim was infuriated by the incessant insult by
the convict and replied him which triggered a fight between the two.

During the fight, the convict dashed into his room to pull a cutlass
to attack the victim and inflicted multiple cutlass wounds on him and
managed to escape after sensing danger.

Chief
Inspector Annor stated that, the victim who was bleeding profusely was
rushed to Eastern Regional Hospital in Koforidua where he is currently
on admission.