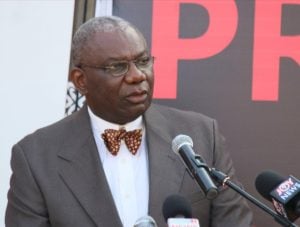 Management of Ameri Energy has stated that it had no discussions with government with regards to the power plants and the  new deal withj Mytilineos.

The Energy Minister laid an agreement on the floor of Parliament in July 2018 on a renegotiated Ameri deal which was originally signed in February, 2015.

Some energy experts and well meaning Ghanaians believe the new deal is a wrong move, and have called for the resignation of the Energy Minister, Boakye Agyarko.

In the supposed renegotiated agreement, government is expected to extend the  $510 million deal from its original five years to 15 years with the government committing over $700 million to it. 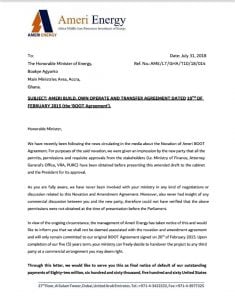 “As you are fully aware, we have never been involved with your ministry in any kind of negotiations or discussion related to this Novation and and Amendment Agreement,” the statement said.

The company insists they remain committed to the original agreement signed in February, 2015.

“In view of the ongoing circumstances, the management of Ameri Energy has taken notice of this, and would like to inform you that we shall not be deemed associated with the novation and amendment agreement, and will only remain committed to BOOT Agreement signed on 2oth of February, 2015.”

In the statement, management of Ameri Energy also urged government to settle default payments of some $82, 660, 560.00 owed them.

They noted that failure of payments of the money owed them will lead to resort to legal actions.

Sat Aug 4 , 2018
Juabehene Decorating Kabaka Wife Nana Otuo Serebuo, Juabenhene, decorating wife of the Kabaka with ‘Kente’ cloth as Otumfuo looks on The Asantehene, Otumfuo Osei Tutu II stole the show in Uganda over the weekend with the royal horns of Asanteman which were manufactured several years ago. Otumfuo Osei Tutu, who […]