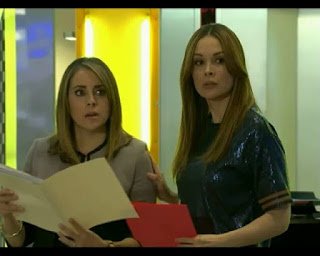 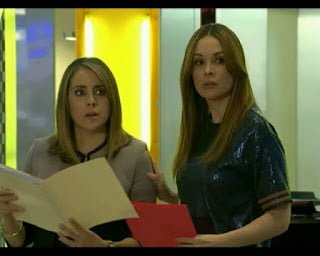 Cesar and Amaya bump into Max and Constanza just in front of their room and there Constanza
never hesitated to let Amaya know that she and Max made up and Cesar
congratulates them and Amaya pretentiously also did same and enters the
room and cries bitterly inside.
Now Cesar can spy on Amaya and hear her conversations through his computer since now, he’s been able to accomplish the installation
of a camera in her office. So, the next day, he hears in detail telling
Carolina that she and Max made love when they got lost after the
accident and this makes him very furious. Amaya again expresses her
nausea and disgust it would cause her if she had to do the same with
Cesar because she never loved him and this makes Cesar Incredibly cry as
a baby.

Yaayaa makes Ivan believe many lies, including with no consideration at all for the grief she would cause him that his father died long ago.
Manuel accomplishes to spring Nana Yaw from jail and instead of the boy repenting for what he did, the young man is still insolent.
Juliana is able to get in touch again with Armando and asks him to tell
her why she convinced her into running away with him and abandoning her
like that when he has professed his love for her and she hears through
Armando that Lucrecia paid him handsomely to seduce her and to make her
leave her home twenty years before because she was a burden to her and this makes Juliana very sad and full of rage.
Mariana collapses and Ulises has to call on a nurse to check on her. The nurse looking after Mariana tells Ulises that her blood tests indicate that she is pregnant.
the detective assures Lucrecia that if Florencia is in Mexico he will find her but he never finds her and Lucrecia thinks he is incompetent because Florencia is alive following her dad in and out.
Aaron gives to Cesar’s secretary an envelope and he tells her
specifically that it’s a memory card of a camera and whiles saying that,
Amaya and Carolina overhear him and they reason on how to get the card
because they suspect it could be that of memory card of Gustavo the photographer they sent.
Juliana reproaches Lucrecia for her intervention and she is astonished
when she receives a hard slap on her face and she tells her she always
knew she was a heartless and worst human being in the whole wide world
and today she confirmed that she indeed has no limit since she was able
to pay her music teacher Armando to seduce her and pretended to love her
and get her out from the house and far away from her family and
Lucrecia becomes so surprise.