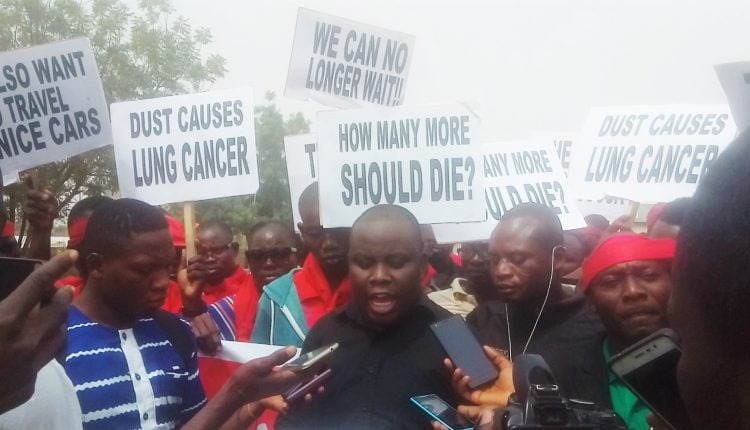 Scores of residents in the Upper East region have poured into the streets again in an outburst of rage against government for “deliberately slowing down” reconstruction work on the dreaded Bolgatanga-Bawku-Pulmakom Road.
The 116-kilometre-long ECOWAS highway has been in a terrible shape frustrated residents say has, for several years, been causing a lot of havoc to road users and homes along the stretch.

The Mahama Administration awarded a GH¢612million contract to Queiroz Galvão, a Brazilian construction firm of international acclaim, in the middle of 2016 to reconstruct the “killer road”.
But the company, which was scheduled to complete the project within 30 months, withdrew its equipment from site in November, 2017—17 months into a serious job yet far from complete at the time.
The sudden pullout, according to sources, was due to failure on the part of the new government to pay some arrears owed the company.
The development prompted a news conference led by a group that called itself the “Concerned Kusaug Youth” late in November, 2017, at Zebilla, capital of the Bawku West District. The contactor, following that press confab, moved back to site after receiving a word from government, and recalled some of the casual workers who were laid off in the wake of the first withdrawal. But the comeback, which restored a hope the public had lost, was only short-lived for same reason.

The demonstrators streamed through the streets with placardsOn Friday (yesterday), the Concerned Kusaug Youth regrouped themselves and, joined by several other residents in the region, launched the biggest demonstration ever on the ‘abandoned’ project. The protest, closely monitored by armed security men and intelligence agents in their numbers, did not take place again at Zebilla.
It was staged in the Pusiga District, in an area near Pulmakom— where the stretch of the stalled reconstruction work, which is originally scheduled for commissioning by close of 2018, is planned to end. And it saw the demonstrators, costumed in blazing-red bands and shirts, resolutely display placards in the air as a brass band played uninterrupted tunes that attracted more people to the procession as the picketers streamed through the town with a red banner in front, bearing the caption: “Fix Bolga-Bawku-Pulmakom Road Now!!!”.
Some of the placards, boldly printed on white backgrounds, also read: “How many more should die?”, “Fix our road”, “The money is there!!!” and “The road is our dignity” among other strong notifications.
Demonstrators file Petition to President Akufo-Addo
The demonstrators concluded Friday’s protest by presenting a petition to President Nana Addo Dankwa Akufo-Addo through the District Chief Executive (DCE) for Pusiga, Zuberu Abdulai.
But they made the contents of the petition known to the press first, at a converging point in town, before they handed out a copy of the document to the DCE for the President. Spokesperson for the Concerned Kusaug Youth, Jarvis Avoka, dressed in a black outfit that reflected the grief-stricken mood of commuters on that risky road, read the petition.
“Your Excellency, in the first quarter of 2017, while on a thank-you tour of the region, you reassured the Zugraan Naaba Asigri Abugrago Azoka II (the Paramount Chief of Bawku) and his subjects of your government’s commitment to complete all ongoing projects in the area including the Bolga-Bawku-Pulmakom Road.
“You again gave assurance during your working visit to the region in October, 2017, and even expressed satisfaction with the progress of work on the road. It is, however, very sad to bring to your notice that progress of work on the road has been painfully slow,” delivered Mr. Avoka as a crowd of agitators, who surrounded him in the sun, punctuated his delivery repeatedly with dark remarks directed at government over the ‘abandoned’ road project.

Whilst highlighting some “armed-robbery attacks and serious health complications” travellers are said to have suffered on that road from time to time, the group also mourned with “over 500 casual workers” reported to have been sacked last year after the contractor’s first withdrawal decision.
“As a group with keen interest on the timely completion of the road, we have observed with great disquiet the seeming lack of interest demonstrated by the government in releasing funds for the smooth progress of work on the road and its timely completion. Your Excellency, the question we ask is, what is our crime as a people from this part of the country that makes us undeserving of a top-quality, standard highway?
“Mr. President, we the Concerned Youth of Kusaug call on you to prioritize fixing this life-changing road project and get Queiroz Galvão back on site. We have suffered for far too long. This is the time we can no longer wait,” the group stressed.
source:starrfmonline

Find a man to marry, you are ageing – Lutterodt advises Yvonne Okoro