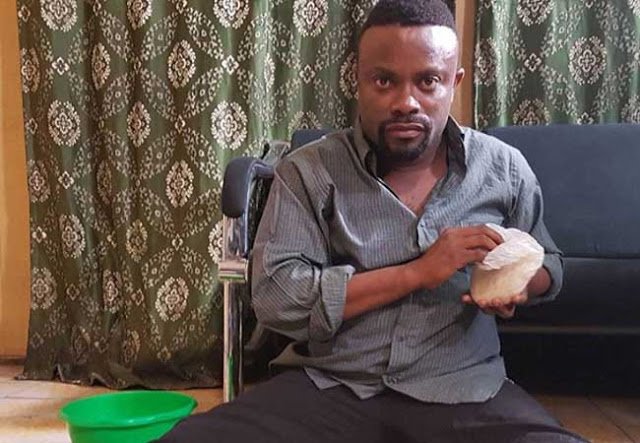 He revealed that most people actually see him as dumb in real life due to his movie roles – He also described himself as foodie that could cry if deprived of food More often than not, people tend to judge actors by the roles they play in movies.

Jim Ikye is seen as a playboy, Patience Ozokwor is seen as wicked mother-in-law, Charles Okafor is known for his ritualist roles. However, the screen life is usually very different from real life as Nollywood actor Bishop Umoh recently stated.
The actor and comedian who is known for his dumb village boy roles spoke about how his acting career affects people’s perception of him in real life. Speaking in an interview with Punch, he said he usually isn’t bothered by how dumb people think of him and thus,makes little effort to prove them wrong.
He said: “There was a time when I was in the middle of a discussion with some people and I noticed a woman staring at me with her mouth wide open. She did not close her mouth or stop staring at me till I left the place and I knew it was because of the way I was handling the discourse intelligently.”
“I don’t believe anyone is born dumb and for me, what you see on the television is different from reality. Like I always tell people, I have dual personality; I have the domestic and commercial life. What you see on the television is the commercial aspect of me, but when you see me physically, that is my domestic side. You cannot deal with the commercial aspect of me for a whole day without being frustrated because Okon cannot take a single instruction without causing headache. It is an unrealistic comedy, it is called exaggerative humour. I give my artistic dexterity to the public, they love it and I laugh all the way to the bank.”
Facebook
Twitter
Pinterest
LinkedIn

90% of Pastors in Ghana are fake – Kwaw Kese