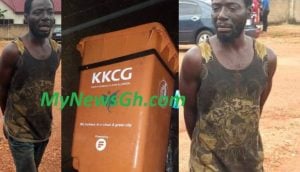 Eva Amoateng who is a KMA night sweeper spotted Mohammed Lufai carrying the dustbin on that day around 6:30pm.

The accused person Mohammed Lufai was charged for stealing.

Mohammed Lufai broke down in tears after pleading guilty with the charge leveled against him but told the court he found the dustbin on a dumping site.

Police Prosecutor told the court to prosecute the accused person to serve a signal to those who attitude is affecting KMA aim to making Kumasi the cleaner city.

The Convener for KMA Environmental Sub-Committee James Nana Prempeh in an interview with Osei Kwadwo said the assembly is happy with the judgement saying it will be a lesson with those sabotaging the exercise.

James Nana Prempeh revealed 10 out of 500 dustbins placed at some vantage points in the metropolis have been stolen.

According to him the assembly is putting measures in place to establish Sanitation court to deal with sanitation offenders.

“We have declared war on those who attitude is affecting our aim of making Kumasi the cleaner city. I want to take this opportunity to express my gratitude to the Nkawie Circuit Court for the judgement. We will continue to prosecute sanitation offenders to ensure that our aim has been achieved” he said.

JUST IN: Collins Dauda charged with abetment of assault

Wed Sep 26 , 2018
Former Minister for Lands and Natural Resources Alhaji Collins Dauda has been charged with abetment of crime according to General Secretary of National Democratic Congress (NDC), Mr Johnson Asiedu Nketia. He disclosed on Accra-based Okay Fm that he accompanied the Member of Parliament for Asutifi South on Tuesday to the […]