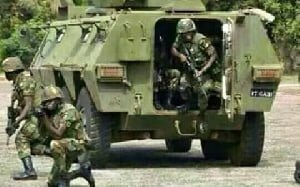 Newland Ansah, a secretary to the Ga-Oshiyie Traditional Stool in the Greater Accra Region and some 19 other victims have filed a writ at the Accra High Court against the Chief of Defence Staff (CDS), the Director of the Bureau of National Investigations (BNI) and the Attorney General (AG) over assault by some military personnel.

“Around that same time, my chief, Nii Kofi Akrashie ll, called me and also told me his compound and the whole community was surrounded by some military men”, and that the said “military men flooded the community with threats and noise all over, destroying valuable items in the palace and the houses of the individuals living within the community”.

He lamented that they were detained the whole night till the next day, 14 June 2019, at 6 p.m. in the evening and released.

He condemned the torture and assault meted out to them while in custody, explaining that they administered “several slaps and beatings on us, one using his elbow to hit my backbone anytime I try to verify why we have been arrested”.

“The said officials did, under the threat of harm, force us to perform several military-style drills particularly anytime we say something or ask questions which they did not seem to like; and the said officials did use insulting, intimidating and abusive words on us”.

Key among the demands and reliefs being sought is an order for the immediate and unconditional release and surrender of all seized and damaged items taken from them.

The victims want a fair, adequate and prompt compensation to paid to them for the violations of their rights to personal liberty.

OMG: Miracle Occur As man Preaches on a moving Car without a Driver (VIDEO)