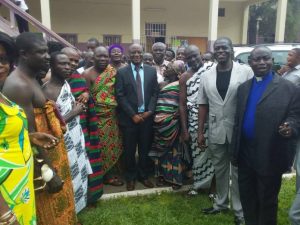 Two (2) nominees for the Kwadaso and Afigya Kwabre South Districts failed to attain the votes needed for their confirmation hence their inability to be part of the ceremony.

At a brief but solemn ceremony at the Ashanti Regional Coordinating Council (ARCC) Monday morning, some Members of Parliament and constituency chairmen of the New Patriotic Party (NPP) as well as chiefs and opinion leaders thronged the common room to observe proceedings.

The Regional Minister charged the newly sworn in Chief Executives to serve their people with humility and selflessness.

He urged them to use their mandates to chart a path of development for their respective communities in the region.

Mr Osei Mensah reminded them that their conduct will either earn them the support of their indigenes or residents.

He therefore entreated them to operate a transparent administration so as to attract the support of residents including chiefs and opinion leaders in their respective communities. 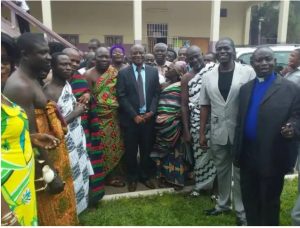 Speaking to this reporter on behalf of the sworn in DCE’s, Mr Akwannuasah Gyimah promised to be diligent in their work.

He noted their determination to carry out the mandate given to them by the President and the good people of the districts.

The people, Mr Akwannausah revealed are desirous of initiatives that will help them get jobs to do.

This desire, he noted will spur them on to draw up plans that will help them carry out basic infrastructural developments in the districts they will be heading.

‘’In my case at Asokwa we are faced with floods anytime it rains, our roads are bad and our youth are jobless but my firmest commitment is to reverse this trend with the help of the MP and the Assembly’’, Mr Akwannuasah posited.

Mon Aug 6 , 2018
Energy Minister Boakye Agyarko President Nana Akufo-Addo has relieved the Energy Minister, Boakye Agyarko of his duties Monday, August 6. In his place, Minister for Lands and Natural Resources, John Peter Amewu, will act temporarily as the energy minister, a statement under the signature of director of communications at the […]