VIDEO : I would rather watch animals than watch Ghanaian Television – Otabil 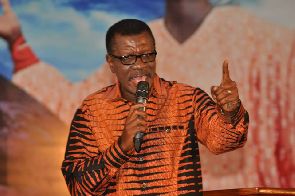 The International Central Gospel Church (ICGC) founder, Pastor Mensa Otabil on the event of the church’s 34th-anniversary service on Sunday 4th March, gave the congregation his candid opinion about the media in Ghana.Describing the Ghanaian media as mediocre and depressing, he said instead of them to focus on useful discussions about how to find solutions to the myriad problems riddling the country, they choose to indulge in pointless discussions about politics from January to January.He lamented, “If you listen to our national conversations, you wonder; are we serious?” Are we? “Turn on the radio. Here there is no political vacation. From the time the vote is cast to the time the next vote is cast, we argue politics morning, afternoon, evening… Check all your top radio talk shows, take politics out and they have nothing to talk about again. I won’t even say take politics out, take NPP and NDC out. Just say, this morning no NPP, no NDC. There’ll be no conversation because we can’t even think beyond two parties. We can’t think solutions and we are driving ourselves into this abyss of hopelessness.”He said in order not to “pollute” himself with the filth that is the Ghanaian media, he spends as little time as possible paying them any attention. According to him, he can only endure Ghanaian radio for as long as 15 minutes before tuning off because “It is very depressing. It will contaminate your soul”. “I don’t watch Ghanaian TV much. I watch a little… one, two, three, and I say Oh nothing has changed, go back.”“I will watch animals. I’ll watch cheetah, I’ll watch lion, I’ll watch antelope anytime… I’ll watch giraffes anytime because at least they’ll tell me how to hunt, how to get to your goal, how to avoid being eaten. I’ll learn that from an antelope. At least I’d come back and say: nobody will eat me. But you listen to Ghanaian radio, watch Ghanaian TV and you wonder; are we still here, the mediocrity?”.

It is apparent from the ICGC Boss’s comments that he thinks very poorly of the media in Ghana. “The excellence that we used to have is all gone down. Instead of raising the bar higher we’ve lowered it and lowered it everytime we lower it lower and lower and lower and we have huge problems”.He said he didn’t care if western media decide to joke because they have solved most of their problems. We, on the other hand, have serious problems to tackle, yet we choose to joke. And he obviously doesn’t find any of it amusing in the least.Hmmm… I do have a friend who would never hear a certain “Living Word” on a certain radio station because it is “Ghanaian media” and all content is absolutely trash and he/she would rather race snails.

10 doubts about Efia Odo’s biography you should clarify