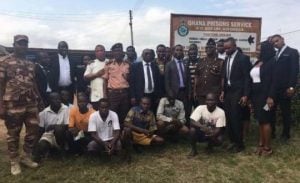 Seventeen remand prison inmates at the Koforidua Central Prison, in the Eastern region have been discharged through the Justice for All programme.
The inmates, most of whom have been on remand for a long period of time gained their freedom after the judges had applications accepted.

Briefing the media after the court sitting, Justice Clemence Honyenuga, said it was a record for the 17 inmates to be discharged.

He said out of the total 55 applications that were considered, 17 were discharged, two were convicted and imprisoned, 21 were granted bail, 10 application for bail were refused and five were stroke out.

He said some of the cases that were dealt with were murder cases, with a few cases of causing harm and narcotic drugs.

He mentioned that from October this year, the programme would be decentralized for judges in the regions to handle them, saying, they were in the process of finalizing the process for it to commence.

Justice Honyenuga commended government for taking over the funding of the Justice for All programme since the last financial year to this year.

He said in the 11-year history of the programme, they had to go cup in hand begging their foreign donors for funding, saying, it was a bit of relief for them now since it was now well-grounded and funded by government.

Madam Emily Addo Kyere from the Attorney Generals’ Department indicated the challenge they faced most of the times was that the dockets, which originated from the police stations were not forwarded to them on time for advice.

This she said mostly delayed the cases, adding that, the duration for investigations was also a cause of the delay.

She said the Justice for All programme had come to serve a genuine course since most of the remand inmates have genuine cases.

Mon Aug 5 , 2019
Photos:10-year-old orphan gives birth after being raped A 10-year-old orphan was dumped at a hospital in Benue state while experiencing labour pains and the child has now given birth after having to undergo Caesarean section due to the small size of her pelvis.   According to Chigozie Effe who shared […]