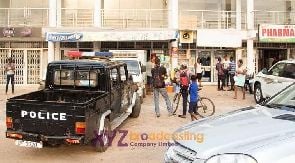 Fear has engulfed business owners at Trassaco Junction, a suburb of East Legon in Accra after an attack on a Forex bureau on Thursday, 15 February 2018.The robbers raided the bureau in Rambo style and made away with over 50,000 cedis at about 4:30pm. The amount included 1,000 dollars they seized from a foreign national whom they tracked to the place after which they dashed off on two motorbikes.No one was injured from the gunshots fired and no arrests have been made.Twenty four hours after the incident, the Kedze Forex Bureau remains under lock and key but the adjacent businesses in the enclave who seem to have resumed operations told XYZ News that they fear for their lives.“We’re living in fear. Because it has happened to our neighbor so it can happen to us too so right now we know we are not safe”, one pharmacist told XYZ News’ Wisdom Hededzome. A mobile money vendor also said “what happened yesterday came as a shock to us, because they deal with money and we also deal with money. The fact that nobody could make an attempt to rescue them even makes it look scarier”.Bureau Operators Non-compliant with Investigators.Meanwhile the East Legon Police say their investigation into the attack is being hampered by the lack of cooperation by the owner of the facility.The East Legon District Police Commander, Supt Cephas Arthur told Kenneth Awotwe Darko that they [Bureau owners] have so far been reluctant in offering vital information to track the suspects.“Apparently it looks as if the owner was not interested on reporting the case. The police impressed upon him to do so but he said he was taking stock of what has been taken and that he will be coming to the police station to lodge a formal complaint. As we speak he has still not come to lodge a complaint to the effect” he said.Superintended Cephas Arthur intimated that despite this development, the police will go ahead to start investigations with the hopes the victims furnish his outfit with details.