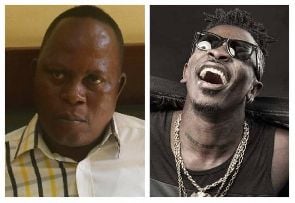 Leader and Founder of Jesus Blood Prophetic Ministry International Church, Prophet Nana Kofi Yirenkyi aka Jesus OneTouch has revealed that multiple award-winning dancehall artiste, Shatta Wale will never die before the end of this year.Prophet E. K. Mensah of the Christ Vision Prayer Ministry had prophesied that the ‘ Ayoo’ hitmaker and the Zylofon Music signee Shatta Wale will die before July 2018 if he does not repent.Shatta Wale in a live Facebook video on Saturday responded to the Prophet prophecy by stating that if he doesn’t die by December, together with his Shatta Movement were going to burn Churches in Ghana to serve as a deterrent to fake prophets.Sharing his thoughts as a Prophet in an exclusive interview with Mabel Opoku of Razzonline.com, Jesus Onetouch delineated candidly that, Shatta Wale will never die this year and thus the prophecy by E.K.Mensah is fake.“ I don’t know Shatta Wale but I know his songs…Shatta Wale, Ebony, Terry Bonchaka and Suzzie Williams are the eye of Ghana if Ebony is dead God will never Kill Shatta Wale so I don’t agree with that prophet…may be he ate excessively which enticed him to make such a fake prophecy”, Jesus Onetouch told Mabel Of Razzonline.comHe continued,”So what will that prophet gain if Shatta Wale dies? So can’t he remember that this young man has bought food for poor people before? He is simply a fake prophet…God love his children Shatta Wale will never die…I will caution the prophet to be careful in order not to incur the wrath of God”,Touching on whether he sides with Shatta Wale for indicating that he would burn down Churches if he doesn’t die as prophesied before December,2018,Prophet Onetouch told Mabel Of Razzonline.com that:“Oh no,You see Shatta Wale spoke out of anger…but I will advice him to take his time…he should never try and speak against anyone…immediately he tries to say that he will burn the Churches it means he has agreed that he is truly going to die; but he should stand firm and never agree to the prophecy.It would be recalled that, in a landmark ruling, Jesus Onetouch was Jailed by a circuit court about a decade ago.His case made interesting headlines in the media and considering the countless controversies that have embroiled preachers in recent times, Onetouch’s case topped public ratings.He was accused of incest— number one taboo in Ghanaian society but had indicated that he was framed up. Apparently, the evidence against him could not be proven beyond all reasonable doubts.There had been two medical examinations on the girl who was allegedly defiled and none of those two medical investigations correlated; one medical examination disproved the possibility of defilement, while the other suggested a possible sexual exploitation.Jesus Onetouch was given ten(10)-year jail term but he was lucky enough to be left off the hook after just two years.