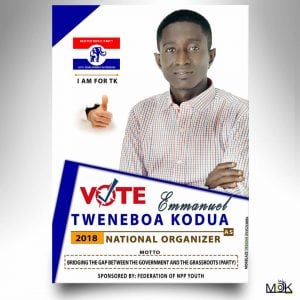 TWENEBOA KODUA, THE BEST BET FOR THE NATIONAL ORGANISER PORTFOLIO OF THE NPP

The Executives and the entire members of National Federation Of NPP Youth without any reservation endorses the candidature of Mr Tweneboa Kodua (TK) as the next National Organizer for the New Patriotic Party(NPP).

With the “nearing collapsed relation” between the government and the grassroot members on whose shoulders the Party used as a spring board to leap into power, we deemed it right and appropriate to support a candidate who was at the fore front of the battle line with the grassroots. There was no other person than Tweneboa Kodua, an ardent communicator and a grassroot man.

It is very appalling with the way and manner the grassroots of our beloved party have been neglected, rejected and left dejected by the top hierarchy of our Party. We very much understand that once a party is in power, the agenda becomes more of “a collective National interest” but we unequivocally ask, “do you ignore the bull who ploughed the land in the famine season when harvest time is due?”
The latter has been a passionate concern of Tweneboa kodua (TK), the same concern held by us also.

Statistically, research shows that, 85% of the the NPP Youth who campaigned vigorously and tirelessly for the NPP to come to power are still unemployed and no party executive has made any sincere efforts to aid them to get their fair share of the power they won for the party. This we believe if not well addressed has the tendency of sending the party back into opposition.

With his campaign motto as BRIDGING THE GAP BETWEEN THE GOVERNMENT AND THE GRASSROOTS, coupled with his undiluted passion for the well being of the grassroots,
we saw that indeed he is the only person who has true sense of affection for the mass grassroots who undeniably played a major role in bringing the party into power.

Tweneboa Kodua has distinguished himself and risen through the ranks and file of the party having served as TESCON PRO, TESCON President respectively during his Tertiary Education(Sunyani Technical University).

Again, because of his love for our Tradition(NPP) his Accessible nature,Hardworking mentality, TK was assigned to be be the First TESCON coordinator under the leadership of Chairman Adu Gyan (Former Chairman B/A) and Mr Alfred Anyeh then Youth Organiser.

Tweneboa Kodua offered himself to the party main stream politics by being elected as as Polling station Organiser at Kokobra electoral area(Ejisu Constituency). His service credentials to the party(NPP) are of great enviable record which time will not permit us to elaborate further.

We(NFONY) therefore pledge our unflinching support to TK because his BLUE PRINT brings to the table a more practicable vision and ideas which has eluded the grassroots for so long a time.

As the party in power, we need practicable, selfless and grassroots Leadership mentally to bridge the gap between the government and the party to see NPP retain Power come 2020 & by a very significant extension; serve mother Ghana well. 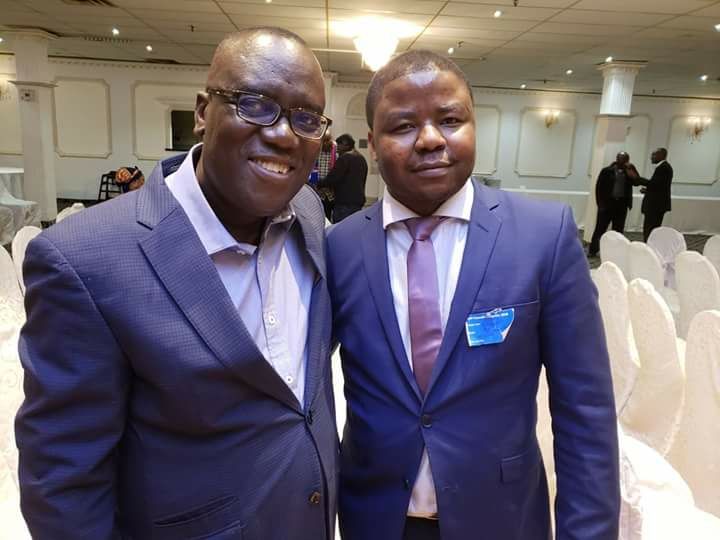