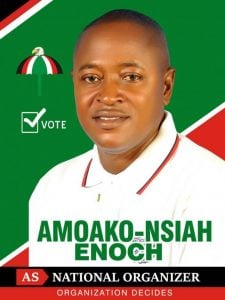 A national organizer hopeful for the National Democratic Congress (NDC), Enoch Amoako Nsiah says the NDC stands a better chance of winning the 2020 general elections if they can retrace steps to the ideals that birthed the June 4 revolution.

The ideals of transparency, accountability and sacrifice, the hopeful noted drew the downtrodden and ordinary people to the fold of the NDC.

Speaking toMichael Ofosu-Afriyie of Ghanaian Observer Newspaper over the weekend, Mr Nsiah stressed only a return to these values will help the party recapture power in 2020.

Mr Nsiah, popularly called ‘Senior’ believes the grass-root supporters would only sacrifice as they did previously when they see the election of leaders who have the principles of June 4 in them.

‘’We can win the 2020 polls if we consciously elect leaders who are known to respect and love the principles that set us up as a political party’’, Mr Amoako Nsiah posited.

Touching on the competencies of those aspiring for national positions, Mr Nsiah asked that delegates gauge those who showed selfless attitudes in whatever positions they occupied previously.

The NDC, he noted needed people of proven character to lead it as the party prepares for the 2020 elections.

He tasked delegates to be watchful of those they elect, adding the people they will elect in the national internal polls will also lead the party’s national campaign as officers.

This, he noted calls for circumspection from the party faithful knowing the choices they make in the upcoming elections will have an effect on the 2020 general elections in the country.

‘’The NDC needs people with integrity to lead it out of opposition into government and it is important that members elect those who have proven track records of competence and loyalty’’, Senior noted.

Mr Amoako Nsiah urged party members not to be hoodwinked into the fold of persons who display opulence in the campaign for national office.

The subtle monetization of the country’s politics is akin to the values of those who have real revolution blood in them.

As a socialists party, Mr Nsiah believes the NDC should hold on to the values that made the palm-wine tapper and truck pusher feel proud to belong to the NDC.

Mr Amoako Nsiah urged the party’s delegates to vote for him as national organizer so as to enable him touch base with grass-root supporters’’,

‘’ I represent those who are committed to restoring the values that set us up as a political party and I am determined to rekindle the fire that helped to lit the ideals of the party’’, Mr Nsiah passionately stressed.

Mon Aug 20 , 2018
The Director General of the Ghana Health Service (GHS) Dr Nsiah Asare has stated that government has agreed not to directly post health workers to health facilities in the country. According to him, the various regional and district hospitals, based on GHS’ staffing norms, will be given recruitment quotas to […]