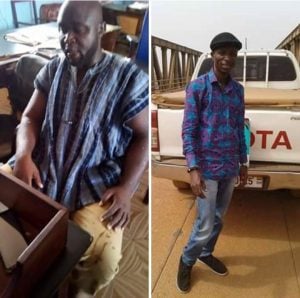 The Tension in the opposition National Democratic Congress (NDC) in the Northern region seems not to be cooling off any time soon, as two party leaders deform each other on radio.

Today Monday, the two democrats namely, Hon Salisu Bi-Awuribe who is the regional secretary and the immediate past elections director of the party, Mr. Rashid Computer spew unpalatable words against each other in relation to the weekends disturbance in the party.

Both speaking on Diamond fm, a local radio station base in Tamale and monitored by NorthernWebGh.com, the former elections director accused the regional secretary, the communication director and organizer of the party of plotting against the regional chairman.

He said the aforementioned executives have form a cabal to damage the image of the regional chairman, Alhaji Ibrahim Mobila and thus hold meetings without the chairman recommendation.

Mr. Rashid hinted that the group went to the Chief of Nyankpala who happens to be John Mahama’s best friend, and plainly lied that the chairman doesn’t like the former president.

He said the cabal especially the secretary has no respect for elders. According to him the executives have annul the names of co-opted members the chairman appointed.

He further questioned the cabal knowledge of the NDC constitution, adding that the executives lacks common understanding of party proceedings.

The regional secretary, Hon Salisu who was injured during the Saturday violence debunked the accusations, and urged the elections director to refrain from those meaningless statements.

He established that they really visited some opinion leaders in the region, including the paramount chief of Nyankpala for them to intervene in the chairman leadership style.

Mr. Rashid interfered and noise the bluff of the secretary, “What type of hypocrisy is this, and you call yourself a lawyer, you don’t understand what you are talking about, simple mathematics, I don’t deal with unintelligent people, I don’t deal with unintelligence minds, I have never fail my exams, I pass all my exams, I have PHD and he knows it”. He told the presented.

“We are all born with words, you know my words, if you use any words on me, I will use same, and you know I have never fail my exams up to my PHD level, am just telling you”.

The secretary who remained silent further said “I don’t deal with incredible people, the fact is that I am a person of credibility, am a person of good upbringing and good moral standard”.

“As a result of the good moral upbringing and standard, am not happy with the way things has gone, but if you have characters like computer and co, and they push you overboard, you are force to say certain things. For the sake of the listeners I apologize for the words used, with all apology I don’t want to continue”. He emitted pleaded.

However, NorthernWebGh.com reported on Saturday that vigilante groups of the party disrupted a meeting at the Global Dream hotel, which was been chaired by the regional secretary.

The vigilante group further injured the secretary, and destroyed his vehicle in addition.

Another faction of the vigilante group went on rampage, and ransacked the regional chairman private office adjacent the Tamale teaching hospital.

Madina-Adenta Highway: Another pedestrian knocked down by speeding truck