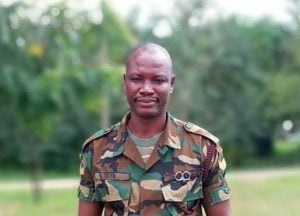 Officer Simon Deku is being impersonated by a Facebook scammer
Military Police of the Ghana Armed Forces is said to be in search of one facebook user with the name Deku David who has used the picture of one Military Officer, Simon Deku on his facebook profile and claiming to be an Army Major from Ho 66 artillery.

claims to be a military recruitment officer and has used the social media to allegedly defraud people.
The military officer who is being impersonated has since issued a disclaimer on his Facebook wall and cautioned the public to treat that Deku David account and recruitment information being posted on his wall as fake.

“I want to state categorically that I am not Deku David and I don’t know anyone by that name. I am not a recruitment officer nor major. He is a fraudster and must be treated as such.” he said in the post sighted by Awake News

This is his disclaimer:

My attention has been drawn to someone using my picture as his Facebook profile picture who claimed to be a military recruitment officer by name Deku David. The imposter claimed he is a major from Ho 66 artillery when contacted by those he lured to be recruited. I want to state categorically that I am not Deku David and I don’t know anyone by that name. I am not a recruitment officer nor major. He is a fraudster and must be treated as such.The said person has been reported to the Military Police and all is being done to have him arrested and dealt with. Thank you. 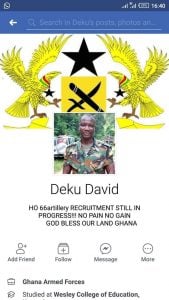 Sun Sep 9 , 2018
TESCON KNUST CONDEMNS FRIDAY’S BRUTALITY DATE: 08/09/18 KNUST Security men are meant to protect the student’s and not to assault them. Unfortunately, the security of KNUST seems to have a different swipe. A video has gone viral after Friday’s intended procession and has left many wounded and others embittered. Security […]