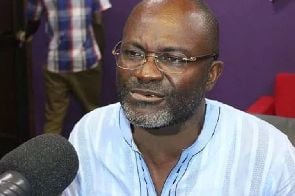 Controversial NPP Member of Parliament for Assin Central Honourable Kennedy Agyapong has lashed out at Mr Martin Amidu who appeared before parliament to be vetted for the Special Prosecutor job.

The outspoken lawmaker said in his usual candour: “that man will collapse NPP, mark my words. I have had that intuition. My instincts are not wrong. God has given me that gift and I thank Him. When I see something, it happens. He has pain in him”, the MP thundered.

“Me, I would have walked him out straight if I were chairman of the committee. Look at his arrogance towards Haruna’s joke. He cannot be investigating cases with his emotion and bitterness. The way he embarrassed Haruna over the Builsa way joke exposed his arrogance. It was not good. If the President watched, he should call him and talk to him. I repeat, it won’t work. That arrogance he portrayed over there, I am justified about him. And I hate his pretentious smiling. Who will buy that, after he embarrassed Haruna?”, Ken asked.

“He is not a good choice”, he told listeners of Philip Osei Bonsu on Ekosii Sen Tuesday afternoon.

This is not the first time Member Parliament (MP) for Assin Central Constituency and New Patriotic Party (NPP) firebrand has spoken about the appointment of Former Attorney General and Minister of Justice, Martin.A.B.K Amidu as the Special Prosecutor. The politician who is close to President Nana Akufo Addo had in earlier weeks reprimanded his party members for rejoicing over a “bitter” Martin Amidu.

He said on Adom TV’s Badwam program: “Celebrate Martin Amidu, he will soon come after the very party that appointed him. Martin Amidu is like Circus training based on Animal Flow Workouts. You train the animal and one day, one day it will attack and kill its owner. That is what will happen” he revealed on Adom TV.

“Ghanaians are jubilating Martin Amidu. Wow! Because of what Ghanaians want I will not comment. You know how animals are trained in ciruits, don’t you? We live in this country to see one day… I shall be vindicated. They do not know what is ahead of them. Go ahead and hail Amidu. The Man who made him a Minister see how he embarrassed him and now a prosecutor? No further comment”, he had added.