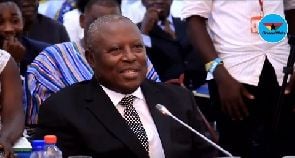 Policy think-tank IMANI Ghana says former Attorney General Martin Amidu who was vetted by parliament Tuesday for the Office of the Special Prosecutor, has given a good account of himself as the best person for the job.

According to IMANI, the nominee “exhibited great wit, candour, anger sometimes, and above all boundless knowledge of his forte, the law”.

A statement issued Wednesday said IMANI has “greater faith” in Mr. Amidu as he would work “without negative pride, prejudice and preference towards anyone”.

It consequently wants some allegations it made against some ministers who are attempting to use their power to benefit from the pension of COCOBOD staff brought to the attention of the Special Prosecutor when he is approved and begins work.

??Read the full statement from IMANI

Ghanaians had another opportunity to listen to the principles and ideas that motivate the President’s nominee for the Special Prosecutor role during his parliamentary vetting yesterday. Mr. Martin Amidu, the nominee, exhibited great wit, candour, anger sometimes, and above all boundless knowledge of his forte, the law.

We at IMANI have greater faith in him, that he will work without negative pride, prejudice and preference towards anyone. Amidu is content with what life throws at him and he says it without shame that his asset declaration form wouldn’t be the envy of many a public servant.

While that sanctimonious posture and deed are welcomed in our part of the world, certainly, not even Amidu will entertain the remotest thought by any public officer with some power to display, ever threatening his accrued pension contributions which prior to the pension reforms in 2007, was assuredly miserly. Well, not even now, that his pension would have been half managed by private corporate trustees as insurance against the insulting hand out that the state behemoth, SSNIT gives its uncritical contributors.

Perhaps, this is why the matters playing out at COCOBOD and potentially other public agencies with regards to worker pensions must reach the desk of Mr. Martin Amidu.

In our recent publication on the dangers of political interference in COCOBOD Tier 3 Pension Scheme, we suggested that some ministers of state in the government are using their positions to advance their private business interests. We strongly stand by that suggestion. The purpose of that publication was to educate all workers – and indeed all Ghanaians – of their rights and obligations under the National Pensions Act, 2008 (Act 766) as amended in the National Pensions (Amendment) Act, 2014 (Act 883). Workers are the beneficiaries of pension schemes. The Pensions Act enjoins workers to have a say in the management of their contributions through their representatives on the boards of trustees.

We also stated in our previous article, and are convinced of same to be true, that the actions of those few government appointees are not sanctioned by the government but are only serving their parochial interest. In fact, we will be surprised if this obvious abuse of public office held in trust for “we the people” is known to government. Our publication seeks to ward off those involved before we start naming and shaming.

As stated in the original publication, IMANI was at the forefront of the advocacy that led to the licensing of the first nine corporate trustees in March 2012 and the subsequent registration of pension schemes in October of that year, not to mention the release of funds from the Temporary Pension Fund Account (TPFA) at the Bank of Ghana. Pension funds are serious matters that ought not to be toyed with, let alone politicized.

We applauded the smooth operations of pension schemes so far under the reforms. What we did not state in the previous article is how well the COCOBOD Tier 3 Pension Scheme has been run. Our checks with trustees and members of the fund indicate that they are satisfied with the scheme’s operations and all of its service providers, so far. Trustees of the Scheme (except the Independent Trustee) serve for free and take their duties on the trust seriously because as they put it “they are managing their own retirement funds”. This is the spirit of the pensions reforms. And this what we applaud.

The threat, as hinted in our original article, is coming from a couple of ministers with close ties to a corporate trustee and a fund management firm, respectively. There are two things that these ministers want; that:

1. The individual trustees are either replaced with persons who will be amenable to their manipulation and influence;

2. The entire board of trustees is dissolved and replaced by a corporate trustee firm thereby side-lining workers’ representation in the management of the scheme.

None of the above serves the interest of employees of COCOBOD. The good news is that employees are vigilant and would leave no stone unturned in defending their interests. This was evident at a staff durbar held on Monday February 12, 2018. We commend COCOBOD employees and the unions for standing up for their rights and implore all Ghanaian workers to emulate same.

For clarity on these serious allegations that we are making, and strongly stand by, we offer specifics. The official functions of the ministers at the heart of these interference include working directly with COCOBOD in one official capacity or another. It is these respective official capacities that the actors seek to abuse in furtherance of their private business interests, forgetting that the Fund wholly belongs to the workers. More specifics:

1. One of the ministers is pushing and intimating trustees to appoint a fund management company that belongs to another government appointee (a director in another ministry). The board of trustees has evaluated and written to reject the proposal from that fund management company and yet the intimidation and pressures persist. The minister has interestingly been very overt in his approach. More on that later;

2. The second, a deputy minister (in a different ministry from (1) above but in the same ministry as the director in (1) above), is an equity holder of a corporate trustee firm. It is this corporate trustee firm that he is pushing to be appointed to replace COCOBOD’s own employees as the sole trustee. His approach has been subtler but the effect – if he succeeds – obviously far worse.

3. If (2) above succeeds, (1) becomes inconsequential as these actors seem to be coordinating their actions well. This is because as the sole trustee, that corporate trustee firm could appoint its preferred fund manager; and your guess is as good as ours. This also creates serious conflict of interest situation. The names of the fund management and the corporate trustee firms involved are withheld, for the time being.

Maybe, it is the case that the very sound advice given by President Nana Akufo-Addo that those of his “appointees who wish to build wealth should remain in the private sector” has been forgotten. Well, IMANI is here to remind them.

Knowing that this government listens, we would not be surprised if they have begun their own investigations into the matter.

Ebony died because she accomplished her purpose — Bullet