A 21-year-old young man has been arrested for attempting an attack on the Western Regional Minister, Kobby Okyere Darko at his home on Saturday 17th May 2019 around 4:30 pm.

The young man identified as Peter Emmanuel Kumi jumped into the house of the Regional Minister na*ked and stole women dressed at the house to cover himself. Throughout all these, he was wielding a sharp weapon.

Stonebwoy apologize to Ghanaians and organizers of VGMA

According to the police who confirmed the incidents to Connect FM’s morning show host Nhyiraba Paa Kwesi Simpson revealed that lucked eluded Peter Emmanuel Kumi when he was spotted.

He was spotted by 16-year-old family friend’s child who had come on a visit. He spotted the man jump the wall and quickly informed others in the house of what he had seen.

The police were quickly invited to the house. They, in turn, overpowered Peter Emmanuel Kumi who was heavily under the influence of hard drugs.

Hon. Kobby Okyere Darko followed the police to the station to write his statement. Neither the Regional Minister nor any of his household got harmed in the incident.

Mon May 20 , 2019
The Ghana Police Service on Sunday, May 19, 2019, arrested two of Ghana’s biggest musicians, Livingstone Etse Satekla popularly known in showbiz circles as Stonebwoy and Charles Nii Armah (Shatta Wale) over a brawl that ensued at the just ended Vodafone Ghana Music Awards. The camp of Stonebwoy and Shatta […] 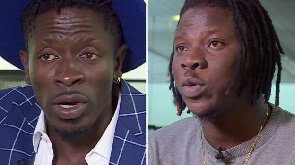