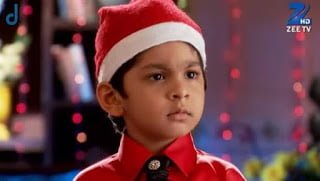 Location: Jhansi CourtA lady from the modelling industry, comes in, and advertises the ZEE DHAMAKA, and then also wishes him the best of luck, for his peculiar case that he is handling. He thanks and leaves. grannny and all others compose urmi that nothing wrong would happen, as she has never done anything wrong. Ishaan calls and asks gaurav if the work got done or not. He denies, and says that he would manage. Ishaan insists that he wont be able to drag time in the court, and would need the evidence soon. gaurav assures that he would arrive on time. As ishaan comes, urmi asks if radha shall come, and he assures that she shall, and asks her to hope for the best, and asks her to think, that the new year shall bring lots of happiness for her, just like shaurya wanted. All smile while urmi is tensed.