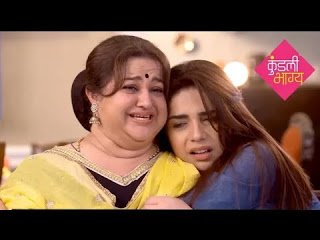 Karan smirks as Preeta tells him to follow her in the hotel. She looks towards him and asks if he already got the room number? He nods. Karan shuts her mouth as Sherlin might hear this. Preeta asks how he got the room number. Karan says he found a lady and recalls stealing her purse. He goes to reception and asks about the room number of Sherlin Khurana., he has to return her purse. The receptionist asks Karan for a kiss; Karan says then she must tell him on whom name is it registered? Karan kissed the back of girl’s hand, the room was 402 and the room was registered after a company’s name.In the room, Sherlin tries to provoke her ex-husband. Preeta asks Karan if he is going to room 402. Karan asks if Sherlin would be waiting for them and open the door so easily? They go to place their
ears with the door, trying to hear someone speaking from inside. Instead, they share an eye lock.
There, Deepak was waiting for Preeta. He was curt that she has been away for hours now. He thinks it was his mistake, when she slapped him he shouldn’t have left but slapped her in return. She must accept him as her fiancé, he can’t let her wander freely in the streets of Mumbai. He gets an idea and thinks he will surely enjoy the game now.

Preeta says they must call Rishab here. Karan wasn’t ready as Sherlin must have won Rishab’s trust. Sherlin would tell Rishab that it was only a misunderstanding. Everyone would get suspicious about them. Karan says they must gather a proof. Preeta says they have to either take photos or videorecording of them two. They have to get into the room and suggests about climbing a window. Karan asks if she considers him a circus player, he can’t take this risk. Preeta says she must think about something else.In the room, Sherlin tells her ex-husband that Preeta suspects her. He tells her that no one has been able to catch them till date, he will handle Preeta.Outside, Preeta gets an idea. Karan tells her to keep her ideas to herself, she either turns him to superman or a batman. He finds a cleaning lady, she signals towards Preeta and says he will indulge the girl and she must take the master key. Preeta denies committing any theft. He hushes her up and assures she will do it. Preeta poses to be busy with the phone while Karan takes the girl to open his room door. Preeta goes to take the key. The girl turns to bring a master key. Karan begins to flirt with the girl saying she must work as model. Preeta finally finds the master key and signals Karan by moving her hand. All of a sudden she drops a bucket. The girl runs towards Preeta and calls security. Karan holds Preeta’s hands and run from there. They hide under the staircase. Karan blames Preeta for dropping the key. Preeta apologizes and says she can’t handle such situations. Karan goes to use his last armament. Karan tells Preeta he is going to put hotel on fire so that Sherlin comes out of the room. Preeta says this is dangerous, it might affect everyone in the hotel. Karan climbs a stool and uses a lighter to allow fire alarm ringing. Preeta realizes he was only joking with her.The fire alarm rings. Sherlin was afraid as this shows a fire in the hotel. The water begin to drop off the hotel roof. Preeta attempts to run behind, Karan holds her. they share an intense eye lock. Sherlin and her husband had left the room already. Karan and Preeta go to see the phone recording. Preeta slips in the corridor, Karan in an attempt to save her also fell down. The security had reached to catch them. Karan takes his phone and runs from the grip of security. There, the manager tries to stop the guests. Sherlin’s ex leaves, she goes back to get his phone and hits Preeta in the way.PRECAP: At home, Deepak tells Preeta why was she so frank with Karan, he always try to be close to her. Preeta tells him to get away but instead Deepak twists her arm from behind.